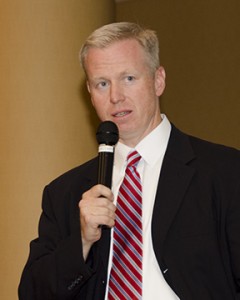 Journalists have been careful to report, as The Denver Post’s John Ingold and Jordan Steffen did today, that nine jurors apparently voted for the death penalty in the Aurora shooter’s trial, two were undecided, and one voted for life in prison. So the prosecutors were three votes short of the unanimous decision needed to put the murderer to death.

George Brauchler appears to present different versions of the decision, depending on the audience. If he’s talking to talk-radio hosts, who apparently aren’t concerned about the basic facts, Brauchler whines that he was only one juror away from winning the case.

“We were one vote away from getting what I thought was the just sentence on this,” Brauchler told KHOW’s Mandy Connell shortly after the trial ended. (Listen here at the one-minute mark.)

Brauchler: It was one juror. You and I both know [former State Rep. Jovan Melton]. You know him better than I do. But it is such an outrageous blanket statement on an entire law based on the decision of one juror, who by the way found this guy sane, found the he committed this crime with aggravators, found that the aggravators outweighed any mental health issues or any other mitigators, and then hung up on that very last phase. And from that one decision, not only do you have Javon calling the application of the death penalty racist, but you got The Denver Post backing him up and going crazy with their comments as well. And it’s an indictment of a system you can’t prove is racist….

Later in the same interview, at 53:55, Brauchler puffed:

Brauchler: But for this one juror, I think folks would have said roundly, ‘Men, you did this case perfectly.”

Yet, in talking about the decision to The Denver Post, where reporters are actually factually concerned about reality, Brauchler tells a different story.

The Post reported: “To Brauchler, [the 9-2-1 decision) is evidence that he was right to go to trial and seek the death penalty. After all, he said, he convinced at least nine jurors of his position.”

It’s a good example of why reporters are important. Brauchler apparently knew he wouldn’t get away with spinning them like he can loving talk-radio hosts.