Is It Ryan Frazier Time Already? 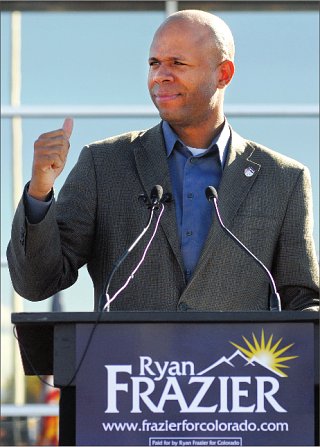 Who has one thumb up and no chance at winning a U.S. Senate race? This guy: Ryan Frazier.

Rumor has it that Ryan Frazier is talking with the National Republican Senatorial Committee (NRSC) about potentially running for U.S. Senate in 2016.

We don’t have many details on the “Frazier for Senate” rumor, but in some ways, it almost doesn’t even matter if the story is true or not. If anybody is seriously considering getting behind Frazier in 2016, it is a clear indication that Republicans are essentially conceding the seat to incumbent Democratic Sen. Michael Bennet.

We wrote in November 2011 that Colorado had likely seen the last of Frazier as a candidate for public office after the former Aurora City Council Member was thoroughly drubbed in his second high-profile campaign in 12 months. Lest you think Colorado Pols is just trying to throw dirt on a potential Republican candidate, take a look at what we wrote following the 2010 midterm elections:

Sometimes a candidate will lose a big race but do well enough that he or she is considered a rising star. Frazier? Not so much. He got bullied out of the Republican Senate primary to run in CD-7, where he proceeded to get the absolute crap kicked out of him by Rep. Ed Perlmutter. Frazier is a good fundraiser and is decent at delivering a prepared speech, but his campaign was amateurish at best and he otherwise proved to be immature, vacuous and just plain silly in unscripted moments. In one debate, he repeatedly demanded that Perlmutter tell him the page number of something in the health care bill; when your big attack is that your opponent can’t recall page numbers, you’re running a student council campaign.

It’s not losing the race that hurts Frazier, but the fact that he couldn’t even be competitive in a Republican year. Frazier lost by 11 points to Perlmutter and received about 13,000 fewer votes than 2008 GOP candidate John Lerew, a guy whose own yard signs said “John Who?”

Not long after losing a double-digit race to Democratic Rep. Ed Perlmutter (CD-7) in the Republican wave year of 2010, Frazier doubled-down and ran for Mayor of Aurora in 2011…with nearly the same result. Frazier lost by 10 points to Steve Hogan in the “nonpartisan” Mayor’s race.

We haven’t seen or heard much from Frazier since his back-to-back beatdowns, although he occasionally pops up at 9News as a Republican “political expert” for reasons that we couldn’t begin to try to explain. So, why would anyone even consider Frazier for statewide office?

It’s easy to forget that Frazier was briefly a candidate for U.S. Senate in 2009, and at one point was even thought to be among the Republican frontrunners for that office before someone convinced him to drop out of the race and join the field in CD-7. If Frazier was ever going to try a political comeback, the 2016 Senate race might be his best chance — if only because Republicans can’t find anybody else to run — and he can at least point to a history of decent fundraising as a selling point (although fundraising would be considerably more difficult with a record of double-digit losses).

Is Ryan Frazier the best that Republicans can do in 2016? Well, no, actually, but the GOP has yet to find a decent candidate who is even somewhat interested in the race, so the NRSC probably has to at least listen to a Frazier pitch. If you think that Frazier couldn’t possibly be any worse than he was in 2010-11, you’d probably be correct. And that, of course, is exactly the problem.