Dr. Chaps: I Am Trump, Trump Is Me 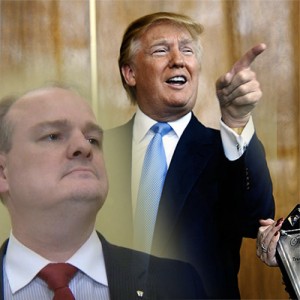 Here’s a link to a perfectly fine story by the Colorado Springs Gazette’s Megan Schrader on the retirement of El Paso County Democratic Party chairman Christy Le Lait, which we would tell you to read even if it didn’t contain an absolute jewel of a quote from the infamous Rep. Gordon “Dr. Chaps” Klingenschmitt.

But with apologies in advance to Le Lait, Klingenschmitt managed to pull a Kanye West once again, hijacking this local interest piece and making national news:

“I find it ironic that the Democrats throw a tantrum when they can’t win an election in a socially conservative city,” Klingenschmitt said when told of Le Lait’s comments. “Because just yesterday one of my best volunteers, who is a social conservative, told me she’s quitting the Republican Party after 40 years because not enough Republicans will stand up for Gordon Klingenschmitt and defend traditional marriage.”

Klingenschmitt, who is running for a state Senate seat in 2016, said his election proves voters want an outspoken leader, not a compromiser.

“It’s the same phenomenon we’re seeing with Donald Trump,” Klingenschmitt said. “He’s too outspoken. He’s not politically correct, and so is Gordon Klingenschmitt, and that’s what people want.” [Pols emphasis]

You’ll recall that Rep. Klingenschmitt was in the news again quite recently after making comments on his Youtube broadcast “ministry” that could be construed as calling for gay Boy Scout scoutmasters to be “drowned in the depths of the sea.” Those remarks earned Klingenschmitt more demands for his resignation from liberals, but only a half-hearted round of distancing from fellow Republicans. We’ve seen nothing since then to indicate further action by Klingenschmitt’s nominal boss, House Minority Leader Brian DelGrosso. Not even Klingenschmitt’s opponent in the upcoming SD-12 primary, or the current holder of that seat Senate President Bill Cadman appear to want draw attention to “Dr. Chaps” one way or the other.

Folks, is it really possible that the answer lies in Donald Trump’s poll numbers? Is Klingenschmitt, like Trump, really “what people want?” Or at least what Republican primary voters want?

As much as we’d like to say Klingenschmitt is wrong, this all makes a certain kind of sense.