Worse And Worse For “Dr. Chaps” 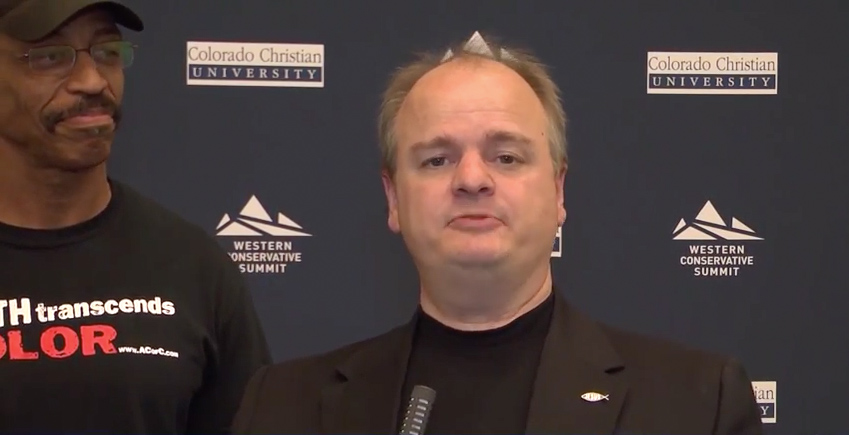 As the Colorado Springs Gazette’s Megan Schrader reports, GOP Rep. Gordon “Dr. Chaps” Klingenschmitt, facing calls for his resignation once again after stating on his Youtube video program that it would be “better” for gay Boy Scout leaders “if a millstone were hung around his neck, and he were drowned in the depth of the sea,” has a rather ironic problem:

A few weeks before Rep. Gordon Klingenschmitt found himself in hot water for saying Jesus said child molesters should be drowned, he interviewed a man on his show who has been convicted twice of sexual assault on a child and called him a “new friend.”

David Dorty, who is active in El Paso County politics and is with the American Conservatives of Color, appeared on Klingenschmittt’s video ministry Pray in Jesus’ Name (PIJN) News on July 16.

Dorty, as The Gazette reported in March, has twice been convicted of sexually assaulting a child, once by a person in a position of trust. [Pols emphasis]

You can watch Rep. Klingenschmitt’s interview here: the relevant portion begins about 17:55 in. Here’s what the Gazette reported about Dwight David Dorty back in March, after he was escorted out of the Colorado Republican Party’s annual meeting on orders from then-GOP chairman Ryan Call:

Ryan Call, who presided over the assembly as chair of the Colorado GOP, said he requested the sergeant of arms ask the individual to leave.

“I did not think it was appropriate to have him there, certainly on school grounds, or involved in connection with our meeting,” Call said.

According to the Gazette, Dorty was convicted twice of the crime of sexual assault on a child: once in 1986 and again in 1995. The second conviction added the aggravator of being a person in a position of trust over the child in question.

Now obviously, there are a number of takeaways from this latest revelation, and some might be mitigated by the time since Dorty’s conviction, and the contention by his supporters that he has been rehabilitated. We have no interest in further denigrating a person who has paid their debt to society to the crimes they’ve committed, though we certainly understand Ryan Call’s preference that a convicted sex offender not come on to the grounds of a public high school for an official Republican Party function.

As for “Dr. Chaps,” whose wishing of death on child molesters didn’t appear to make any exceptions for, you know, rehabilitation?

Not much we can add to that, folks. The circle of utter hypocrisy appears closed.