UPDATE 5:00PM: Recall organizers announce they will turn in over 30,000 signatures to recall each conservative majority Jeffco school board member, more than double the 15,000 required, to the Jefferson County Clerk’s office Tuesday morning:

Join us as we turn in more than 30,000 Signatures For Each Board Majority Member!

We will be turning in more than double the required signatures to the Jeffco Clerk this Tuesday at noon. We would love lots of you to join us as we turn in these signatures. Please arrive by 11:30 am at the Clerk’s Election office (not at the Taj Mahal, but in a separate building).

Once we turn in the signatures, we will turn our focus to the November election!

9NEWS’ Nelson Garcia reports, the campaign seeking to recall three far-right members of the Jefferson County Board of Education, Ken Witt, John Newkirk, and Julie Williams (collectively known as “WNW”) has reached its goal of 15,000 required signatures to recall each board member with a comfortable margin–a drive that took less than three weeks to complete despite a 60-day deadline.

“We’ve been collecting signatures for 17 days. Our goal was 20,000 to 25,000 signatures and have surpassed that goal already,” [Jeffco United for Action spox Lynea] Hansen said. “I think it also says very loudly and clearly that Jefferson County wants this recall.”

Hansen says Witt, Newkirk, and Williams have shown a lack of transparency and have abused school board policy.

“Everybody’s really worried about the direction that JeffCo Schools is headed in and this is their answer to helping stop that change that isn’t good change.” 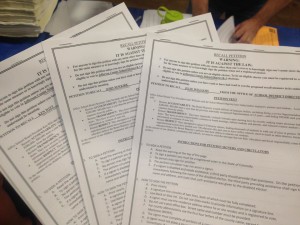 Having easily brought in the number of Jeffco voter signatures required in so little time, it’s basically assured now that the recall question will appear on the regular November ballot in Jefferson County, along with the two seats up for election this year currently held by outgoing progressive minority school board members. Again, this is a key development, since recall opponents’ messaging against the recall has up to now revolved around a huge expense for the district to hold a recall election. Organizers never planned anything but a recall election in November, however, and said so. Today, they can assure anybody who was concerned that the recall election will not cost the school district hundreds of thousands of dollars.

The only thing we can add is that, by all accounts we have heard, the reason the petition drive was quick and easy is that the community in Jefferson County is keenly aware of what is going on in the battle over their school board. Voters who have no idea who, say, their state representative is are paying attention–and needed no convincing to sign the recall petition. The highly visible public protests carried out by Jeffco students last fall over the board majority’s disastrous proposed “review” of AP history curriculum, along with subsequent protests along Jeffco’s highest-traffic arterial street, have succeeded in making this school board a household discussion item–and the sentiment is overwhelmingly against what the right-wing board majority has done. High quality public schools are a major and longstanding point of civic pride for residents of Jefferson County, and they perceive that to be under threat.

As we’ve said before, what’s happening here can’t be manufactured. You couldn’t buy it for a billion dollars. It is an authentically grassroots uprising by a legitimately aggrieved community. In an era when seemingly every political “movement” is the product of some lavishly funded and focus-grouped professionalized action plan delivered from on high, it might even be called an inspiring thing to witness.

Either way, if the petition drive’s swift success is any indicator, God help “WNW.”