Multiple local news outlets covered last night’s kickoff of the petition drive to recall the right-wing majority members of the Jefferson County Board of Education, following almost two years of controversy as they plunged headlong into an ideological campaign to “reform” one of the state’s highest-performing school districts. A quick roundup starting with 9NEWS:

JeffCo United for Action says the recall has to do with the lack of transparency and wasting taxpayer money.

One of the stated reasons for the recall is the board majority’s consideration of reviewing the new Advanced Placement U.S. history curriculum, which prompted waves of student protests in the suburban Denver district last year.

Board President Ken Witt told 9NEWS in June he welcomes the challenge to all five seats, calling it a chance to have an open dialogue about the future of JeffCo schools. [Pols emphasis]

7NEWS estimates the crowd in attendance last night at “more than 1,200,” and organizers report that hundreds more were turned away after parking lots at the Jefferson County Fairgrounds filled to capacity. And Jeffco school board President Ken Witt sounds much less enthusiastic about the “open dialogue” of a recall election than he did last month:

It’s estimated more than 1,200 people showed up for the launch of the recall effort at the Jefferson County Fairgrounds complex.

“It is an effort to recall all three of those board majority members,” said one of the three recall petitioners, Michael Blanton.

“It sounded to me like (this board) was looking to unite the community and take the schools in a really positive direction. I think they’ve done just the opposite,” said Julie Callahan, who has two children in JeffCo public schools.

Among those targeted in the recall effort, Ken Witt, the current president of the Jefferson County Board of Education.

“You know, I’m disappointed with how easy recalls have become in Colorado,” said Witt. [Pols emphasis] 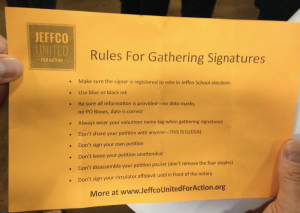 Chalkbeat Colorado’s Nic Garcia estimated the crowd at around 2,000 people:

If Wednesday night’s event was any indication, they are likely to find traction.

The crowd of approximately 2,000 included plenty of teachers and parents familiar with the ongoing dustup in Jefferson County, as well as fresh faces and political figures.

It also included many students, who have been a powerful force in lobbying against the board members. Before recall organizers took the stage, students from Jeffco Students for Change led the crowd in chants of “Recall! Recall!” and “The people, united, will never be defeated!”

After a huge rally in May in Littleton’s Clement Park, not to mention the massive protests that filled the streets of suburban Jeffco last fall over the right-wing majority’s ill-fated “review” of AP History curriculum, expectations were very high for last night’s event to formally kick off the recall petition campaign–and the turnout once again exceeded those expectations despite terrible weather and a large traffic jam outside the event. After the brief rally, attendees lined up at tables organized by geography to obtain petitions and sign up for canvassing.

As we’ve explained previously, organizers are looking to complete the petition phase of the recall campaign well ahead of the 60-day deadline for turning in signatures, in order to make sure the recall election appears on the regular ballot this November along with the two open seats being vacated by progressive minority members Lesley Dahlkemper and Jill Fellman.

If the energy of the crowd and sheer numbers witnessed last night are any indicator, they’re going to hit that goal comfortably–and the three majority board members, known collectively as “WNW,” are looking at the strong possibility of very short tenures on the Jeffco school board.