Radio Interviewers Should Have Questioned Coffman After Comparing VA to ISIS 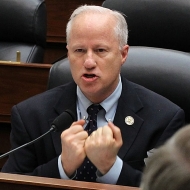 On Friday, after Rep. Mike Coffman suggested that if leaders of the Veterans Administration were put in charge of ISIS, they would be too incompetent to keep track of beheadings, neither of the radio hosts who conducted the interview questioned Coffman about whether the Congressman’s comments were appropriate.

Instead, Steffan Tubbs and April Zesbaugh, the co-hosts of KOA 850-AM’s Colorado’s Morning News, reacted this with:

Tubbs: I don’t know what they’re putting in your orange juice back there.
Zesbaugh: [laughing] He’s on a roll! …It felt like a little stand-up there from the Congressman for a little bit.

Asked whether he thought he took Coffman’s comments too lightly, Tubbs emailed me:

Tubbs: “I was surprised by the Congressman’s remark at the very end of our interview, thus my comment. If someone is concerned with what Congressman Coffman said, they should contact his office.”

Tubbs, who’s a serious advocate (on and off the air) for American troops, was right to express his surprise at Coffman’s comments, which have been criticized by the Veterans Administration.

But he also should have questioned Coffman directly about the appropriateness of the remark. Tubbs has shown he’s not shy of asking tough questions, once asking Coffman,who was avoiding reporters at the time, about Coffman’s comment that Obama is not an American “in his heart.”

As it is, in part because Coffman wasn’t questioned during the KOA interview Friday, we’re now only hearing from a Coffman spokesman who told Buzzfeed that Coffman’s VA-ISIS comments were, “a controversy only with liberals and the Washington outrage machine. His sarcastic point was obvious – the VA is an organizational disaster.”

During the KOA interview, Coffman said:

Coffman: It’s too bad we can’t take VA leadership and export it and give it to some of our adversaries around the planet. Let them suffer under the VA’s leadership. Can you imagine if the VA was in charge of ISIS? They’d probably say, “Well, you know it wasn’t quite 2,000 that we beheaded – it was really 24 is the accurate number. We’re sorry that, in fact, they were all our own terrorists that were beheaded because they got missclassified in the system as Christians. I mean, that would be [chuckles] the VA, that would be the VA in charge of ISIS.

Yesterday, the Veteran’s Administration issued a statement saying Coffman’s comments “do not belong in our public discourse.”

Tubbs and Zesbaugh should have Coffman back on their morning show to discuss the controversy over the Congressman’s “sarcastic point,” as his spokesman put it.