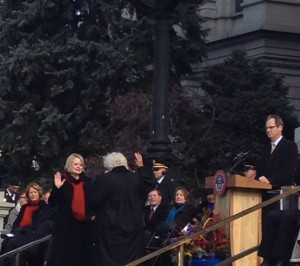 Cynthia Coffman sworn in as Attorney General in January.

On Friday, we received word from more than one reliable source about fresh rumors that Colorado Attorney General Cynthia Coffman may be preparing to announce a run for the U.S. Senate–a particularly interesting rumor given her husband Mike Coffman’s announcement one week ago that he would not run against incumbent Sen. Michael Bennet.

Since then, we’ve heard conflicting reports about this possibility, including a source that says an imminent run is highly unlikely given a lack of any evidence of preparation by Mrs. Coffman for such an announcement. Also, since Cynthia Coffman was just sworn in as Colorado’s new Attorney General just a few months ago, immediately jumping into the U.S. Senate race could be spun negatively by opponents–and that’s before her husband’s motives for passing on the race are scrutinized.

Given Cynthia Coffman’s equivocated positions on social wedge issues like marriage equality running for her first elected office last year, it’s likely that she could not clear a primary field in the same manner as her husband anyway, and will face heat from fellow Republicans on issues ranging from LGBT rights to gun control.

There are several subplots to this potential story we’re trying to get more information about right now that may help confirm or refute this rumor. In an interview this weekend, 2008 GOP Senate candidate Bob Schaffer said he “doesn’t see it” in response to a question about Cynthia Coffman running for Senate. Schaffer spoke favorably of a number of possible candidates including Rep. Scott Tipton, former Gov. Bill Owens, even disgraced 2010 gubernatorial candidate Scott McInnis and talk show host Dan Caplis.

Whatever happens, it’s hard to argue with The Hill’s Jonathan Easley, who reported Saturday:

Rep. Mike Coffman’s (R-Colo.) decision this week to pass on a Senate run has damaged Republican hopes of taking out Sen. Michael Bennet (D-Colo.), their top incumbent target in 2016…

Without him, the GOP faces running an untested, second-tier candidate against a well-funded incumbent in a state that will be critical in determining which party controls the Senate in 2016.

At this point, there’s nothing to suggest that Mrs. Coffman has what it takes to break out of the “second tier”–and that may be enough to forestall her entry into the race, preferring to build name ID and momentum for a 2018 (or even 2022) run for governor. With that said, we are looking into it, and we’ll update when (and if) we hear more.