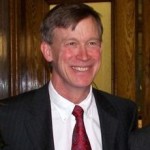 The Colorado Springs Gazette’s Megan Schrader follows up on the story of the conservative-controlled Jefferson County school district’s snubbing of Gov. John Hickenlooper this week, denying his office’s request for a bill signing ceremony at a Jeffco public school.

Hick’s sense of humor wins the day once again:

Gov. John Hickenlooper fired back at a perceived snub from Jefferson County Schools on Wednesday after two high schools refused to let him hold a bill-signing ceremony on school property.

“The last time I was at Lakewood High School, Katy Perry was there and somehow she wasn’t a risk,” [Pols emphasis] Hickenlooper told a crowd gathered for the bill signing at a historic one-room schoolhouse owned by the city of Lakewood. “I fear, I’m not sure, but I fear that it’s a reflection that education has become more polarized and more partisan.” 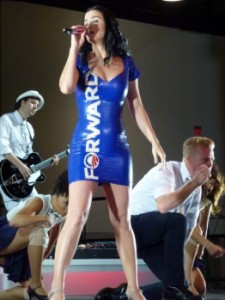 The Democratic governor recently sought permission from Jeffco schools to hold an education bill signing at Lakewood High School. Instead, his request was denied by conservative district Superintendent Dan McMinimee, who cited security and other logistical concerns.

Instead, Hickenlooper held a May 20 event to sign into law key changes to student testing policy from inside an old school house at a museum site in Lakewood. From there, Hickenlooper said he was “disappointed” with McMinimee’s decision.

“I think it introduces at least the impression of partisanship,” Hickenlooper told reporters after the bill signing, which was held on the grounds of the Lakewood Heritage Center…

Lakewood Mayor Bob Murphy said the school also hosted a 2012 event with Republican U.S. Rep. Paul Ryan of Wisconsin, who at the time was a vice presidential candidate. Murphy said the city and the school district was only given a couple of days notice, but that all the necessary security was put in place. [Pols emphasis]

There’s little question about it, the negative press the already embattled Jeffco school district received for rejecting Hickenlooper’s bill signing was not worth whatever political points they may have scored with fellow conservatives. The district’s spokesperson Lisa “Big Résumé” Pinto insists that politics weren’t a factor at all, but that doesn’t square with the public’s recent recollection of political campaign events in 2012 and 2014 at various Jeffco schools–like the 2012 event for Republican VP candidate Paul Ryan at the same school. If those were okay, voters will reasonably ask, why couldn’t Hickenlooper sign a bill directly pertaining to education?

It’s doesn’t matter what excuses the district’s right-wing staffers offer up, the optics of this situation are awful. The incident underscores what a lot of Jefferson County voters already believe–that this school district has been taken over by divisive partisan political operators, who are now dispensing their own political paybacks. Even conservatives in Jefferson County should be able to see the problem with a school district alienating high-ranking elected officials with petty games, not to mention the chilling effect this could have on ordinary citizens who don’t share the board’s political agenda.

Is it their worst offense? Hardly. But it’s pretty revealing.