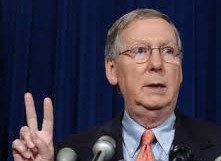 As Roll Call reports, Rep. Mike Coffman (R-Aurora) will have breakfast tomorrow with Senate Majority Leader Mitch McConnell, who hopes to pursuade Coffman to challenge Democratic incumbent Sen. Michael Bennet in 2016. Judging from the headline of the Roll Call story (“What if Mike Coffman Says No“), somebody may have more than egg on their face tomorrow afternoon:

Republicans are trying to recruit Rep. Mike Coffman to challenge Democratic Sen. Michael Bennet in Colorado. If he stays put in the House, that gives the GOP a crop of candidates who could have a harder time in what will be one of Republicans’ few offensive opportunities in 2016.

Coffman will have breakfast Thursday with Senate Majority Leader Mitch McConnell, who will surely make the case to convince the four-term lawmaker to try and join him across the rotunda. Asked about recruitment efforts, Coffman quipped, “Pressure, pressure, pressure.”

Coffman is taking his time. He told CQ Roll Call a decision would come “probably within the next month.”

“Still thinking. Never say never. But I haven’t ruled it out,” he said.

Roll Call says that there is a “large field of Colorado Republicans” who are waiting on Coffman’s decision, though the story just mentions a bunch of obvious names that we already know to be less of a list than a scribble on a napkin.

We’ve said for a long time in this space that we do NOT think Coffman will run for the U.S. Senate. Coffman’s troubles with the VA Hospital in Aurora certainly won’t help.