Get More Smarter on Monday (May 18) 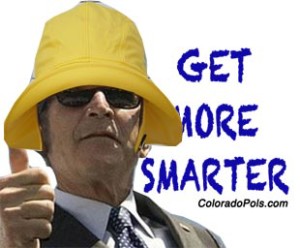 Just in case you needed any more of a reason to stay away from motorcycle gangs. It’s time to Get More Smarter with Colorado Pols. If you think we missed something important, please include the link in the comments below (here’s a good example).

► Republican State Treasurer Walker “Wasn’t Me” Stapleton continues to show the political agility of a blind skiier. As John Frank reports for the Denver Post, Stapleton has turned a minor controversy into a major avalanche:

Days after the legislative session closed, Republican State Treasurer Walker Stapleton is trying to distance himself from a controversial effort to issue billions of dollars of pension bonds to bolster the Colorado Public Employees’ Retirement Association fund.

The two-term treasurer told a conservative talk radio host that he didn’t support the move, despite the fact that records show he signed up twice to testify in support of legislation that would give him authority to issue the bonds…

…Stapleton’s shift is an attempt to quell friendly fire from conservatives taking aim at him for supporting a debt venture they consider too risky. The attack threatens to undermine the 41-year-old treasurer’s conservative fiscal reputation, one that has boosted his political prospects for higher office.

We noted Stapleton’s ridiculous claims last week, which adds more evidence to our analysis from last fall that Stapleton would be an absolute disaster for Republicans if he seeks higher office.

► Agriculture and business groups from around the state are pushing Republicans to do something on immigration reform. Congressman Mike Coffman (R-Aurora) is promising more grandstanding, if that helps (hint: it doesn’t).

► Congressional Republicans haven’t been able to accomplish much of anything with their majorities in Washington D.C., so they’ve found a new foil: They’re now accusing business lobbyists of being ineffective when it comes to trade discussions. The U.S. Senate, meanwhile, is rushing to complete several important pieces of legislation before the Memorial Day recess.

► The Denver Post has made its endorsements for the runoff elections in Denver.

► Defense Attorneys for James Holmes are concerned that graphic testimony at the Aurora Theater Shooting Trial is not going to be helpful for their client’s case. You think?

► Hickenlooper is standing behind Department of Human Services Director Reggie Bicha, and some lawmakers who had been critical of the DHS head seem to be backing off a bit on their criticism.

► Republican Presidential candidate Carly Fiorina made a stop in Colorado Springs on Saturday.

► Louisiana Gov. Bobby Jindal has officially squeezed into the clown car of Republican candidates for President in 2016. Elsewhere, South Carolina Sen. Lindsey Graham plans to make his Presidential campaign announcement on June 1. At this rate, 1 out of every 3 Republicans in America will be running for President by Halloween.

► Former Republican Presidential candidate Mitt Romney tussled with former Heavyweight boxing champion Evander Holyfield in a charity boxing match on Friday. Maybe this wouldn’t have been perceived as well while Romney was a candidate for President, but this is exactly the kind of lighthearted image that Romney could have used once in awhile in 2012.

► President Obama wants to restrict the use of military-style equipment by local police forces.

► Governor Hickenlooper is expected to sign legislation to make some changes for medical marijuana prescribers.

► Take that, Utah! A Colorado museum curator says completion of the transcontinental railroad in 1869 should be celebrated in Aurora, Colorado.