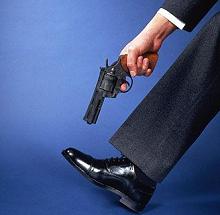 The Denver Post’s John Frank reports on the death in the GOP-controlled Colorado Senate of Senate Bill 15-257, a bill to restore Colorado’s presidential primary election and hold it in the pivotal month of March of an election year. Republican intraparty miscommunication reportedly played a large role in the death of this bipartisan bill:

Sen. Jesse Ulibarri, one of the Democratic sponsors, said he had “no clue” what happened. “This is one of those where I walked away scratching my head,” the Westminster lawmaker said.

Under the bill, Colorado would have held a presidential primary in March that ran parallel with the state’s complicated caucus system. In doing so, it would have allowed unaffiliated voters to play a larger role in selecting the party’s nominees for president and attracted more national political attention. Colorado is considered one of the seven true swing states for the 2016 election.

In addition to both major parties, the bill drew support from prominent Democrats and Republicans, including Senate President Bill Cadman, R-Colorado Springs. But when it came before the Senate Appropriations Committee, four Republicans voted to kill the bill with three Democrats supporting it…

According to Frank, Senate Republicans claim they were under the impression that new Colorado GOP chairman Steve House did not support restoring a presidential primary election, but that’s not correct: House had put out a statement endorsing the legislation before it was introduced. But as we’ve seen on a number of occasions this session, there may be some excuse-making for the party’s right flank at work here:

[A] more powerful undercurrent came in opposition from conservatives in the party, who believed a primary election would lead to more mainstream Republican candidates with the involvement of unaffiliated voters. [Pols emphasis]

Got that? The real problem here seems to be that the far right wing of the Colorado GOP would lose power over the nominating process with a primary election open to unaffiliated voters, instead of a closed party member-only caucus like we have today. A March primary in which unaffiliated voters could declare affiliation and vote would allow many more people to take part–and for the out-of-the-mainstream ideologues who nominated Rick Santorum in the last Colorado GOP presidential caucuses in 2012, that’s a bad thing.

And apparently, more important than our state being a factor in the 2016 primaries at all.