Are Colorado PERA Negotiations Being Influenced by Federal Politics? 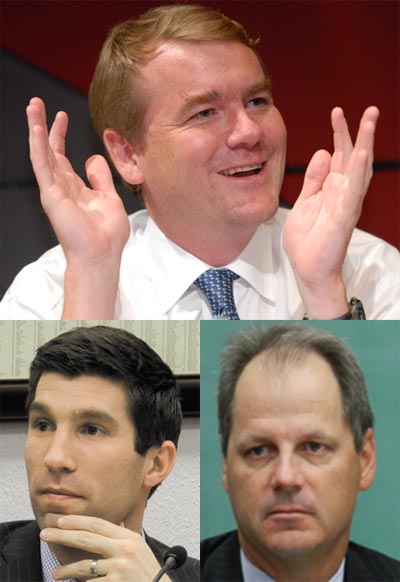 Lynn Bartels of the Denver Post reported late yesterday on a troubling political strategy from Republicans that intertwines state and federal politics:

Intense negotiations are underway at the state Capitol to try to revive a Denver Public Schools pension bill that critics claim was killed by Republicans because of former DPS Superintendent Michael Bennet’s Senate re-election bid.

…Three people with knowledge of the bill told The Denver Post that they talked about it with Sen. Owen Hill, R-Colorado Springs, who said national Republicans didn’t want to see a bill passed that potentially could help Bennet. Hill briefly ran for the U.S. Senate in 2014. [Pols emphasis]

Hill responded Thursday that his chief concern is that PERA is a “real ticking time bomb,” but he acknowledged people told him they had concerns about “some bad deals that were cut” when Bennet oversaw Denver schools.

Bennet’s financial dealings at DPS were an issue in his 2010 Senate primary. “Exotic Deals Put Denver Schools Deeper in Debt,” read a headline in The New York Times. Republicans have said they plan to revisit the issue on the campaign trail next year.

For his part, State Senate “President” Bill Cadman says that he has “never” talked to the Republican Party or “anyone in Washington” about HB-1251, although it’s difficult to say how much people are really listening to Cadman anyway.

We won’t get into the policy discussion of the relative merits of HB-1251 and PERA reforms here (Colorado Pols is a political blog, after all), but the idea that Colorado legislation might be torpedoed because of how it might harm the re-election chances of a U.S. Senator is more than a little troubling. It also speaks, again, to the leadership structure surrounding Colorado Republicans. If this story proves true, it seriously calls into question how much Senate Republicans are even making their own decisions locally.