All Aboard the Super-Friendly Ultrasound Bus! 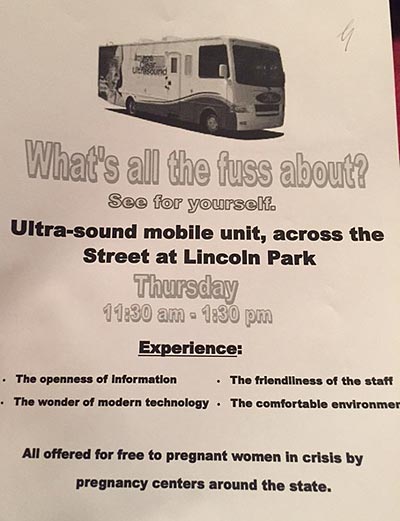 The Neville Nutters — State Sen. Tim Neville and his son, Rep. Partick Neville — really don’t understand why anybody would be upset with their last-minute legislation to regulate abortions. Via John Frank of the Denver Post:

Sen. Tim Neville, the bill’s sponsor, called it a common-sense bill to provide women more information about their decision and rejected the idea that it would spark rancor.

“I don’t think it has to be a divisive issue,” the Littleton Republican said. “I can’t pick what’s going to be divisive or not.”

His son, Rep. Patrick Neville, who is the House sponsor, said he began working on the bills months ago. “I think women have a right to view an ultrasound, and it’s also a safety issue, too,” the Castle Rock Republican said.

That’s right, folks. And what could be safer than getting an ultrasound on a weird bus parked across the street from the State Capitol? The flyer you see here was distributed to State Senators this morning by Tim Neville himself (who cleverly rhymed “bus” with “fuss”). We are not making this up.