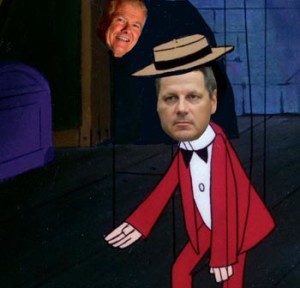 Things could be worse for Senate President Bill Cadman; at least he’s not a hand puppet under Tim Neville.

THURSDAY UPDATE: Senator Tim Neville may be good at manipulating fellow Republicans, but he still can’t make this logic work:

Sen. Tim Neville, the bill’s sponsor, called it a common-sense bill to provide women more information about their decision and rejected the idea that it would spark rancor.

“I don’t think it has to be a divisive issue,” the Littleton Republican said. “I can’t pick what’s going to be divisive or not.”

No, no, you can’t. You just make Bill Cadman do it.

The State Capitol is abuzz over the surprise move from Senate Republicans to introduce a last-minute bill to regulate abortions out of existence — and what this unexpected move tells us about who is really running the show for the GOP.

There’s nothing particularly groundbreaking in the text of Senate Bill 285; requiring women to undergo an ultrasound and a 24-hour waiting period before a procedure is an approach that we have seen from anti-choice groups around the country for many years. Similar legislation was nearly passed in Virginia in 2012 until then-Gov. Bob McDonnell realized that it was obscene to suggest that women could be “forcibly penetrated” via ultrasound (for more background, check out this 2012 story in Slate magazine).

The big surprise, of course, is that SB-285 would be introduced in the State Senate just one week before the 2015 Colorado legislative session is scheduled to come to an end…and right on the heels of the GOP’s “Personhood” debacle. Even if Republicans controlled both chambers of the Colorado legislature, it would take a minimum of three working days to get a bill through the Senate and the House (we know this little fact because that’s what Republicans tried to do with their infamous “Midnight Gerrymander” back in 2003). As it stands now, there will barely be enough time for a House committee to spike the bill — should the GOP even manage to get it out of the Senate quickly — so how did this strange maneuver even surface?

First off, SB-285 could not have been introduced this late in the legislative session without the approval of Senate “President” Bill Cadman. Legislators can’t just toss out a new bill whenever they choose; if this were the case, the legislative session quite literally would never end. If you want to introduce a new bill later in the session, you must secure a “late bill exemption” from House or Senate leadership. That Cadman would grant late bill status for anything is a contradiction of his own words from the opening day of the session (Jan. 7, 2015), when he said in a floor speech “stop asking for ‘late bills’; I’m not kidding.” 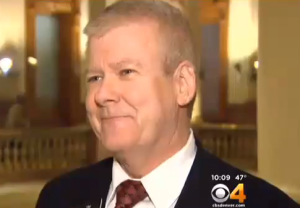 Now, Cadman is no dummy (figuratively speaking, anyway). He knows good and well that SB-285 has zero chance of making it into law. He knows that this move will be used as negative advertising fodder against Republicans in 2016. And he’s also smart enough to understand how badly this undermines his title of “Senate President.” Obstensibly, Cadman is the leader of his caucus and responsible for making sure that things like this do not happen. From what we’ve heard today, there is a growing consensus that Cadman got rolled by the right-wing of his own party — and by Senator Tim Neville specifically.

Neville has emerged as the most prominent Republican of the 2015 legislative session, leading the charge on the controversial anti-vaxxer “Parent’s Bill of Rights,” among other lost causes. The Neville Nutters have been positioning themselves as something of a political “dynasty” in recent years, including Tim’s sons, Rep. Patrick Neville, and Joe Neville, a top lobbyist for the Rocky Mountain Gun Owners (whose Executive Director, Dudley Brown, thinks he owns the Senate); as well as sister-in-law Julie Williams of the Jefferson County School Board. It’s probably not a coincidence that all of the sponsors of SB-285 are also known backers of RMGO.

So what does Cadman get out of all this? By doing the bidding of the Neville Nutters, does he avoid a challenge from his own caucus in the fall so that he can remain “Senate President” in title only? Was Cadman subtly promised more business for his political consulting firm, Advantage Marketing? Or is there another political deal in the works, whereby the term-limited Cadman is backed by prominent anti-choice groups in a potential Congressional Primary against Rep. Doug Lamborn?

Of course, it is entirely possible that Cadman just “gave up” on trying to hold the line against the right-wing fringe of his party. He hasn’t been very good at keeping the trains running on time anyway, so perhaps this weakness in leadership should be expected.

Senate Bill 285 is not going to become law in 2015, but the political ramifications of this bizarre last-minute legislation will likely reverberate throughout 2016 and beyond. Consider the floodgates open.