Bill Cadman Leads Republicans Over the Cliff on Personhood 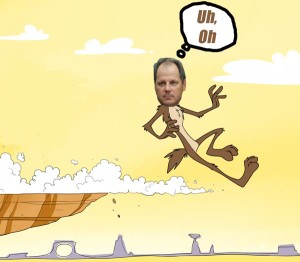 Senate President Bill Cadman should have hit the brakes earlier.

“Justice.” Senate President Bill Cadman said it again…and again…and again in discussing SB-268, the fetal homicide/Personhood legislation he crammed through the State Senate despite objections and proposed amendments from Democrats. Cadman has repeatedly said that his legislation, which was introduced in the aftermath of a brutal crime against a pregnant woman in Longmont in March, is about “justice” in allowing prosecutors to seek murder charges in the death of an unborn child.

But SB-268 is really a bill about “Personhood,” which would change the definition of a “person” to include “an unborn person at every age of gestation.” We’ve said it before in this space, and Cadman and his fellow Republicans proved Monday that SB-268 was always about Personhood, first and foremost. As John Frank of the Denver Post explains:

In the Senate debate, Democrats unsuccessfully sought to amend the bill to take out the language defining a person as an “unborn child at every stage of gestation from conception until live birth.” Another amendment that failed would have gutted the measure to only increase the penalties in attacks on pregnant women under Colorado’s current law.

The critics cited concerns that Senate Bill 268 included verbatim sections from model legislation proposed by Americans United for Life, an anti-abortion organization, and cited similar laws in other states where district attorneys prosecuted pregnant mothers for endangering the child.

As any political observer with half a brain could have forseen, Senate Democrats offered up amendments Monday that would have removed the “Personhood” language from SB-268. Cadman had Republicans entrenched by now, however, so the GOP refused to accept the amendments…and things got worse in the process. 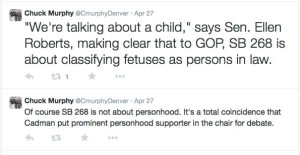 Former Denver Post editor Chuck Murphy was among those (via Twitter) who noticed the GOP’s problem with SB-268.

Republican Sen. Ellen Roberts actually conceded that the real point of SB-268 was to declare a fetus a person, and Assistant Majority Leader Kevin Lundberg (R-Berthoud) began droning on about the importance of extending constitutional rights to the unborn. In voting down the proposed amendments, Senate Republicans are now on record in support of Personhood, which Colorado voters have flatly rejected every time it has appeared as a ballot measure. These votes will be used often in 2016 against Republicans seeking re-election, and it’s gonna sting. The advertisements write themselves: “When Republicans gained control of the State Senate, they pushed a Personhood bill that contained similar language to ballot measures that Colorado voters have opposed on three separate occasions.”

There was never any real chance that SB-268 would make it out of the State House, and Monday’s actions only ensured as much. But Cadman’s “leadership” here may very well give Democrats everything they need to re-take control of the State Senate in 2016. This bill was going to be stuck with the “Personhood” tag no matter how many times Cadman said the word “justice.”

Colorado already has the “Crimes Against Pregnant Women Act” on the books — and has since 2013 — so there was no real practical need for Cadman to rage around the State Capitol for the last month. If Cadman truly didn’t realize that he was walking his caucus into a Personhood debate, then he is in no way capable of leading Senate Republicans in 2016.

If Cadman did realize this problem ahead of time, but pushed forward anyway…well, he is in no way capable of leading Senate Republicans in 2016.