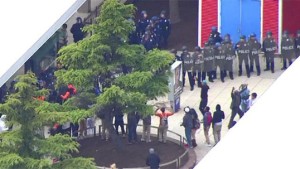 Image from WBAL 11 in Baltimore, MD

This is not directly related to Colorado, of course, but as the issue of police “brutality” continues to rise in the public consciousness, so does the level of violence. As CNN reports:

A riot erupted on the streets of Baltimore late Monday as protesters clashed with police, several of whom were injured.

“This afternoon, a group of outrageous criminals attacked our officers. Right now, we have seven officers that have serious injuries, including broken bones, and one officer who is unconscious,” Capt. Eric Kowalczyk told reporters…

…Earlier in the day, the Baltimore Police Department said it had received a “credible threat” that gangs were teaming up to “take out” officers.

It did not say where the information came from, nor did it say whether the threat was tied to the recent death of Freddie Gray. Gray died in police custody under circumstances that remain unclear. [Pols emphasis]

His death has sparked ongoing protests in Baltimore and raised long-simmering tensions between police and residents there.

WBAL-TV has more on the fires that are now breaking out at various stores. Maryland State Police Officers are being dispatched by the Baltimore Police Commissioner, and Gov. Larry Hogan has placed the National Guard on alert.