All Hail Dudley Brown. Or Not. 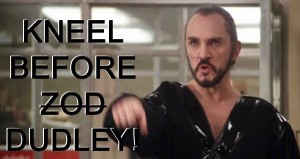 UPDATE: More on the “failed coup attempt” from the Colorado Statesman.

Lynn Bartels of the Denver Post has more today on the bizarre coup attempt from a handful of Republican legislators doing the desperate bidding of Dudley Brown and his Rocky Mountain Gun Owners (RMGO).

As you read yesterday at Colorado Pols, Brown called into a conservative radio station to simultaneously complain and brag about Republicans pulling an unheard-of legislative maneuver on the House Floor. Bartels caught up with some GOP legislators yesterday, and they were not at all pleased with the kneeling:

The schism among conservatives over Colorado’s gun laws widened this week when four House Republicans formed a secret pact and pushed for a procedural move that exposes five members to potentially tough primaries in 2016.

“It was a clever idea, but it put some people in a very bad position,” said Rep. Don Coram, R-Montrose. “We’re going to be talking about this until the end of the session.”…

…Senate Bill 175 died Monday in a Democratic-controlled House committee, but four GOP representatives — Steve Humphrey of Severance, Justin Everett of Littleton, Kim Ransom of Douglas County and Patrick Neville of Castle Rock — hatched a plan to try to resurrect the failed effort to repeal the ammunition ban so that it could be debated on the House floor.

“We forced a recorded vote,” [Dudley] Brown said on 630 KHOW radio Thursday. “Five Republicans voted wrong and all five of them are suspect and in danger in the next primary.” [Pols emphasis] 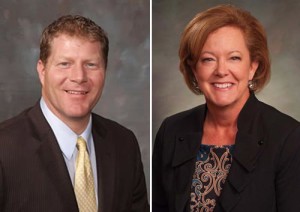 As noted by the Post, 26 Republican legislators supported the failed procedural move, including House Minority Leader Brian DelGrosso and Assistant Minority Leader Polly Lawrence. It would appear as though Rep. Lawrence was not a big fan of the strategy — even though she supported it — because she had no idea it was coming.

“Some communication would have been nice,” she said. “What happened on the floor was unnecessary.”

For years Republicans have used the term “RINO” (Republicans In Name Only) to describe other Republicans who don’t act sufficiently Republican enough.

Maybe it’s time for a new acronym. May we suggest: RICTO (Republicans in Charge by Title Only).