Get More Smarter on Friday (April 17) 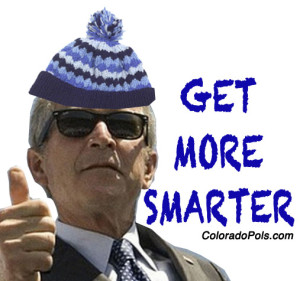 Rain, or snow? Yes! It’s time to Get More Smarter with Colorado Pols. If you think we missed something important, please include the link in the comments below (here’s a good example).

► Colorado Gov. John Hickenlooper is taking a big step forward in urging the legislature to do more to deal with Colorado’s fiscal/TABOR woes. Lawmakers on both sides of the aisle seem a bit confused at the timing of Hickenlooper’s “Fiscal Thicket” plan, given that only four weeks remain in the current legislative session.

► The U.S. Senate will hold a field hearing on the status of the VA Hospital project in Aurora next Friday. As Mark Matthews writes for the Denver Post:

A day after the House Committee on Veterans’ Affairs ripped into the VA for its role in building a new Colorado hospital now expected to cost $1.73 billion — more than five times its original estimate — the Senate veterans’ affairs committee announced plans to hold a field hearing on the issue April 24 in Aurora.

Colorado Sens. Michael Bennet and Cory Gardner had urged their colleagues to visit the state to investigate the troubled project, which has been beset by delays, cost overruns, and legal battles.

Do we really need the Senate Committee on Veteran’s Affairs to come to Aurora to understand that the hospital project is a complete mess?

► The State Senate Education Committee has approved a proposal to increase funding for K-12 public schools in Colorado.

► Legislation that would allow Coloradans to collect rainwater in barrels has stalled in the State Senate.

► The State House is pushing several new bills aimed at workforce development and lowering unemployment in Colorado. From Peter Marcus of the Durango Herald:

The measures serve as the Legislature’s centerpiece jobs effort, working to address unemployment by connecting Coloradans to jobs. Lawmakers touted the package during a news conference last month.

Five bills were backed by the House on Thursday, including House Bill 1230, which would create an internship and apprenticeship program for engineering and research-development careers.

The five bills now move on to the Senate for consideration.

► Republican Rep. Ken Buck thinks the problem with immigration enforcement is that there is low morale in the Department of Homeland Security. Of course, Buck is the same guy who thinks ISIS is operating a training camp just outside El Paso, Texas, so you can take his opinion with more than a few grains of salt.

► Monday is April 20, or “4/20” for you marijuana enthusiasts out there. In anticipation of a day when people are going to smoke a lot of weed, the Colorado Department of Transportation is promoting its “Drive High, Get a DUI” campaign. The Colorado Springs Independent finds this whole thing a little weird.

► Stop looking at me, swan!

► Glenwood Springs has itself a new mayor.

► The longer we go into this legislative session, the weirder things get in the State Senate.

► Dudley Brown of the Rocky Mountain Gun Owners thought he had purchased a Senate Majority for his organization.

► Republican Presidential hopeful and Florida Sen. Marco Rubio has a “market-based” health insurance plan that will cover all of 80 people. Guess he’s not positioning himself as the “big ideas” candidate for 2016.