On radio, RMGO’s Brown talks as if he owns the GOP Senate majority

(Doesn’t he? – Promoted by Colorado Pols) 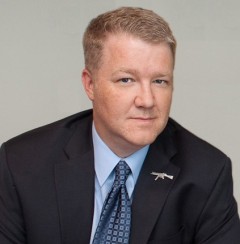 Before she interviewed Dudley Brown, who spontaneously called her show this morning, KHOW 760-AM’s Mandy Connell told her listeners she had no opinion about Rocky Mountain Gun Owners, which Brown directs.

After the interview, Connell, an arch conservative, said she had an opinion–and I’m guessing you will too if you listen below.

In this case, Brown talked as if he has more of a right to interfere in gun legislation at the state Capitol than the Independence Institute has because RMGO bought and paid for the state GOP Senate majority.  And he went on about it, implying he’d organize primaries against five Republicans who voted against a violation of state Senate rules yesterday.

Connell started the conversation, which was first reported by Complete Colorado, with a question about why RMGO was opposed to raising the limit on magazine capacity from 15 to 30 rounds.

Then she asked, “So, why take out Dave Kopel?  Why go after him?”

Brown: Well, look, I don’t want to go into personalities on a public format. Dave Kopel is a wonderful writer. On strategy, he’s horrid! Dave Kopel is actually a Democrat. He has always advocated for compromise at every single turn. Every time we’ve ever had a gun bill in Colorado, he’s always advocated for compromise. And in fact, Dave Kopel is the one who fixed the Democrats mag ban so it did not include shotguns. He showed Senator Mary Hodge how to do it, mechanically. Probably being the one who enabled it to pass. Now, I have no qualms about being honest. But in politics, I don’t want it to be about personality. I want it to be about principle and strategy.

But, in all honesty, we simply don’t agree with Dave Kopel and never have, and for that matter, the Independence Institute, none of whom got these legislators into office.

It’s our organization and our PAC that spent the money to elect the legislature and take the Senate from the Democrats. We were the biggest funders of Republican candidates in the last election. Far bigger than the NRA. And let me be clear, I don’t know if this is – you could ask them, but my understanding is even the NRA opposes this compromise. Now, if the NRA opposes a compromise because it’s too squishy on the gun issue, that pretty much means that it’s as far left as it can be because the NRA usually buys into every compromise. In this case, my understanding is that they opposed it, too. Look there aren’t the votes to pass a 31 round ban –the repeal of the 30 ban, to make it 31. But there aren’t the votes for repeal, unless the Republicans take the House and the Governor’s mansion, neither of which are assured…

Now, to those people who say, “Wait a minute!  I want to be able to buy my 30 round magazine!”  I say, “Shut your pie hole and go buy one!”  There are many retailers who sell them right now.  They ignore the law, and God Bless them for doing so. And in many cases, your District Attorney and your sheriff won’t be involved in any cases against you, anyway…

Brown: I’m saying, “Do what you want.” But, the fact is, the ban, really — it’s like jaywalking. There really is no ban, right now. It’s largely a ban on some of the businesses who manufacture and didn’t want to be here, anyway.

“Now, wait a minute, Dudley, here’s the thing,” replied Connell.  “You just said earlier you don’t want to make this about personalities, but the Facebook post by Rocky Mountain Gun Owners says, “Does Bloomberg have a sleeper cell in Colorado?  All of a sudden, Dave Kopel is fighting as hard as he can to save the magazine ban.  Maybe it’s because he’s a lifelong registered Democrat and a Ralph Nader voter.”   So, that hardly sounds like you’re arguing the issue.  It sounds like a personal attack.”

Brown: Well, that actually, we didn’t start this.

Connell: “We didn’t start it” is not a mature response.

Brown: We didn’t start the battle, Mandy!  But I can guarantee you, we’re ending it….

Connell: You know, Dudley,  I’ve got to take a break.  But, one thing I will say about Jon Caldara is he is no man’s puppet…So, you are saying you don’t want to make this personal, and yet you keep making personal attacks.  I just want to point that out.

Brown: That’s because, frankly, we were ambushed in a dark alley…From our perspective, this is a principled strategy.  Yesterday morning, if you followed what happened in the House, we forced a recorded vote on the entire House floor on the full mag ban repeal, Senate Bill 175.  Kim Ransom and Justin Everett and a number of others forced the recorded vote. And they had the chance. The Democrats had the chance to break ranks and vote with us. And they didn’t, of course. And five Republicans voted wrong.  And all five of those Republicans are suspect, and in danger in the next primary…

Connell: I appreciate the phone call.  [hang up with Brown]  I now have an opinion about Rocky Mountain Gun Owners.