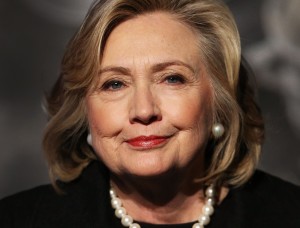 Hillary Clinton is planning to launch her presidential candidacy on Sunday through a video message on social media, a person close to her campaign-in-waiting says, followed immediately by traveling to early-voting states of Iowa and New Hampshire to start making her case to voters.

The trip to Iowa, where a third-place finish in 2008 ultimately led to the collapse of her presidential aspirations, illustrates what aides say is a commitment to not take anything for granted in her second bid for the White House, even though she dominates the likely Democratic field in 2016.

Clinton has already filmed her campaign video, a person close to the campaign said, which outlines the central themes of her second bid for the White House. The message is intended to send a signal to Democrats that she intends to aggressively fight for the party’s presidential nomination.

Here in Colorado, a new poll from Quinnipiac University throws darts at the proverbial wall and comes up with a relatively closely matchup between Hillary Clinton and potential Republican 2016 opponents–the Durango Herald’s Peter Marcus:

Quinnipiac University found that the former secretary of state is losing ground against leading Republicans in Colorado, as well as in Iowa and Virginia, though the election isn’t for another year and seven months.

The only candidates to officially have announced a run for president are U.S. Sen. Rand Paul of Kentucky and U.S. Sen. Ted Cruz of Texas.

Leading the Republican pack in Colorado is Paul, who gets 44 percent to Clinton’s 41.

“These numbers are a boost for U.S. Sen. Rand Paul of Kentucky as he formally launches his campaign,” said Peter A. Brown, assistant director of the Quinnipiac University Poll.

As observers have noted today, Quinnipiac’s polling in Colorado last year was erratic but overall heavily tilted toward Republicans for most of the election cycle. But beyond that, it’s simply too early to know how Clinton will match up against whichever Republican emerges with the nomination. As of this writing there’s no major opposition candidate for liberal Democrats to rally around as a Clinton alternative, with Sen. Elizabeth Warren continuing to insist she will not run and feelers by Vice President Joe Biden failing to gain much traction. If that continues to be the case, Clinton will have plenty of time to shore up the base and build momentum while Republicans are busy slugging it out amongst themselves.

Would Hillary carry Colorado in 2016? Take your own wild guess after the jump.