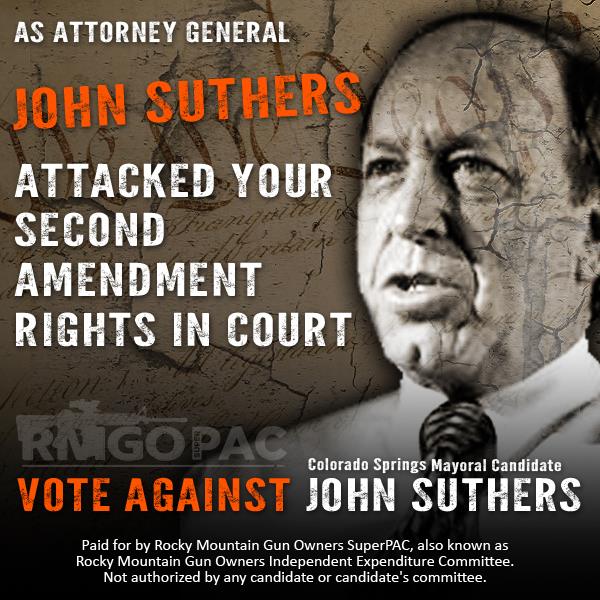 That’s right, folks! Former Attorney General John Suthers, now a candidate for mayor of Colorado Springs, is under fire (again, metaphor) for his “defense” of the 2013 gun laws–both in court defending the state from lawsuits, and in the form of a technical memo on enforcement of the magazine limit law, House Bill 13-1224, that debunked a large percentage of the hysteria being promoted by the very same RMGO.

Former Colorado Attorney General argued AGAINST your Second Amendment rights in court, and now he wants to be Mayor of Colorado Springs. If you or someone you know lives in Colorado Springs, please don’t vote for this gun-grabber.

The detail RMGO director Dudley Brown seems to not wish to acknowledge is that as Colorado’s Attorney General, Suthers was obliged to defend the gun safety laws passed by the General Assembly and signed into law by Gov. John Hickenlooper. Suthers made no secret of his personal opposition to the 2013 gun laws, but that wasn’t enough to induce Suthers to shirk his duties as AG. We have heard that Suthers found some of the hyperbole from fellow Republicans about the gun laws to be absurd, such as their claims that the laws would ‘ban gun ownership’ or ‘ban all magazines.’ That acknowledgement of reality is a far cry from lumping Suthers in with the dreaded “gun grabbers.”

But as we know after watching RMGO these last few years, reality has little to do with it.