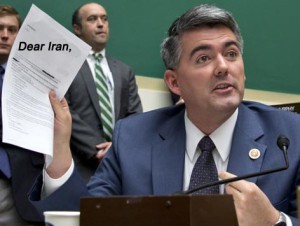 UPDATE: Gardner talks to Mark Matthews of the Denver Post, and doubles-down on the nonsense:

Gardner said the point was making clear that Congress was adamantly against the possibility of an Iran armed with nuclear weapons, and that anything else was a distraction too. [Pols emphasis]

“If you listen to the reaction of the administration, they are in hyperdrive trying to downplay what’s really at stake,” Gardner said. “That’s why the president is trying so hard to distract people from the real issue.”…

…Asked about its long-term effects, Gardner said [the letter] does nothing to hinder his campaign goal of trying work the ideological middle of the Senate.

The Iran issue “is a prime example of where we can and should work together,” he said.

Gardner’s entire explanation is horseshit. He says the point was to make clear to Iran that “Congress” is adamantly against a nuclear-armed Iran…except that the letter wasn’t even signed by every Republican in the Senate.

No dice, Senator. You owe Coloradans more of an answer than this.

The asinine “Dear Iran” letter signed by 47 Republican Senators is becoming a bigger story by the day as Republicans who declined to sign are questioning the letter’s logic. It’s tough to defend when Iran responds by calling it a “Propaganda Ploy.”

Conspicuously absent among signatories to the letter is Sen. Bob Corker (R-TN), the chairman of the Foreign Relations Committee, who says he’s working to build a veto-proof majority for his legislation restricting President Barack Obama’s negotiating options with Iran and ensuring congressional approval before any deal is struck. He hinted that the Cotton letter wouldn’t help advance the cause.

“I knew it was going to be only Republicans on [the letter]. I just don’t view that as where I need to be today,” Corker told Politico…

…The gambit is earning attention well outside traditional foreign policy circles. As of Tuesday morning, the hashtag #47Traitors was the No. 1 trending topic on Twitter in the United States. [Pols emphasis] 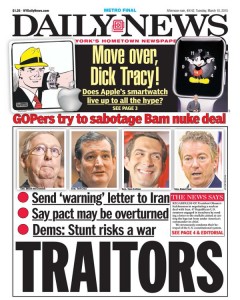 As Politico reports, the seven Republican Senators who declined to sign the letter have been open about their concern with the strategy. Colorado Sen. Cory Gardner is one of the 47 Senators who did sign the letter, but he’s not talking (naturally). Via Eli Stokols at FOX 31:

Colorado Sen. Cory Gardner didn’t back down Tuesday as controversy continued to swirl around the letter he and most of his Senate GOP colleagues signed in an effort to undermine a diplomatic breakthrough with Iran to limit that country’s nuclear program.

He also declined to answer more questions about it…[Pols emphasis]

…Asked for additional comment Tuesday, Gardner’s office stood by its statement from Monday, even amidst new debate in Washington about whether the move, whatever its impact on a potential deal with Iran, is a violation of the Logan Act, which prohibits American citizens from communicating with foreign governments to conduct their own foreign policy.

Gardner’s statement on Monday was a ham-handed attempt to downplay the letter as a clarification for Iranian leaders on our system of government. That Gardner has refused to elaborate today is no real surprise, but he also deserves the criticism he is receiving. He’s a U.S. Senator now — Gardner can’t just shrug off this kind of thing like he did when he was in the House of Representatives.

This isn’t just silly partisan politics at play — this is dangerous. If you are going to sign your name to a letter that openly undermines the diplomatic process of the United States government…you damn well better explain yourself.