The measure made it through the Republican-controlled Senate last month but faced an uphill climb in the House, where Democrats on the State, Veterans and Military Affairs Committee ended the effort by a 6-5 party-line vote…

Environmentalists held a rally at the Capitol just before the hearing to express their opposition to the bill. A group of mothers said the issue is about protecting the health of future generations by moving away from traditional fuel sources that many believe is at least in part the cause of climate change.

“Moms believe we have a moral obligation to protect children’s health and future, ensuring they have clean air is one of the very basics,” said Dana Gutwein, a leader with the group Colorado Moms Know Best. “The reality is that chopping the state’s renewable-energy standard in half would mean relying more on coal-fired plants and more kids dealing with asthma and other respiratory problems.” 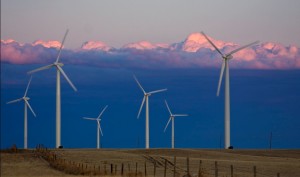 AP via the Aurora Sentinel:

A bill to lower the mandates has passed the Republican state Senate and awaits its first hearing in a House committee Monday.

That committee is controlled by Democrats and is expected to reject the idea.

Ahead of today's hearing, 350.org and Conservation Colorado are rallying to draw attention to Senate Bill 44:

The House State, Veterans & Military Affairs Committee has the capacity to kill Senate Bill 44. This bill would roll back our renewable energy standard from 30% by 2020 to 15%. This is especially absurd because Xcel already gets 19% of their electricity from wind alone. Some renewables are cheaper than fossil fueled power and actually help rural Coloradan communities, contrary to the 'war on rural Colorado' narrative.

This is another situation where Democrats have an opportunity to use GOP support for a bill with no real backing outside one special interest–in this case the fossil fuel industry–against Republicans with the much larger majority of voters who won't support rolling back Colorado's popular renewable energy standard. The "war on rural Colorado" rhetoric employed by opponents of the renewable energy standard for rural electric co-ops in particular was always dreadfully over the top, and fell flat during the failed "North Colorado" secession movement.

The only thing that's changed is control by one seat in the Colorado Senate, and that's why the bill survived long enough to be noted in two separate news cycles. Keep in mind that even Cory Gardner had to run as a renewable energy proponent last year. Outside a small segment of climate change denialist diehards and fossil fuel industry surrogates, opposing Colorado's renewable energy standards–which most voters aware of the issue consider a good thing–makes little political sense.

But along with abortion bans, making the world safe for anti-vaxxers, and rolling back gun laws, this is where Colorado Republicans have chosen to plant their flag. For Democrats looking ahead to 2016, it's a wealth of material.