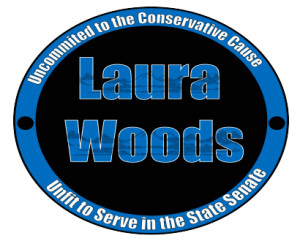 One of the closest Republican victories in the 2014 elections in Colorado was the extremely narrow win by Sen. Laura Waters Woods over appointed Democratic Sen. Rachel Zenzinger in SD-19. By fewer that 700 votes, Woods ousted the former Arvada councilwoman appointed to replace Sen. Evie Hudak, who resigned rather than face a recall campaign principally organized by Woods.

Even after Hudak's resignation, Woods did not have a clear path to the GOP SD-19 nomination. Concerned about Woods' long-term viability for holding this critical swing seat, establishment Republicans fought hard to defeat Woods and put Lang Sias in this seat. Sias lost out to Woods in the SD-19 primary after Rocky Mountain Gun Owners rallied its supporters behind Woods' campaign.

Sias finally won an appointment to the Colorado House in overlapping HD-27 this year, but from what we've heard, Republicans are still very concerned that Woods will be unable to hold the SD-19 seat against a strong Democratic challenge. Even though Woods won in last year's election, she doesn't get a full Senate term before running again: in order to realign this seat with its usual election interval, Woods will be back up for election next year.

Assuming she makes it that far. Sources tell us that Woods is being watched very closely by Republican minders this year in the Senate, and is on a short list of potential GOP establishment primary targets in 2016. Because this seat is considered pivotal to control of the Senate by both parties, there is no margin for error: and Woods by most accounts hasn't impressed upper-echelon Republicans who will map their playing field next year.

During last year's primary, one of the major attacks on Woods from fellow Republicans pertained to her "retirement" in the 1990s, claiming disability for carpal tunnel syndrome. Now, we certainly aren't going to speculate on whether or not Sen. Woods was legtimately disabled by carpal tunnel syndrome, but she does note on her website that her disability was positive insofar as she was able to raise her children at home. As you can see in the mailer above, fellow Republicans used her description of her condition to raise questions about Woods "contributing to the growing epidemic of disability fraud."

If that sounds thin to you, bear in mind that you're not the target audience–Republican primary voters in SD-19 are. And don't get us wrong, depending on how Sen. Woods acquits herself in the next few months, Democrats may prefer she be the general election candidate. Either way, if Republican brass does decide to pull the proverbial trigger on Woods, this disability business will just be the opening salvo.

Stay tuned–control of the Colorado Senate may well hinge on what happens here.