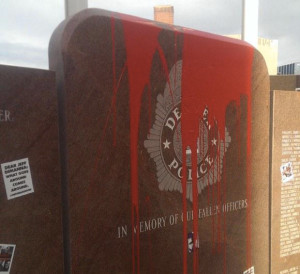 In a development sure to have political ramifications, 9NEWS reports on a fresh war of words between the Denver Police Protective Association and DPD chief Robert White after a vandalism incident during a large anti-police brutality protest march Saturday:

He says officers were told not to take immediate action when protesters defaced a memorial for fallen officers.

"We will no longer follow him as we move forward," said Nick Rogers, president of the Denver Police Protective Association. "He is not our chief."

Saturday, demonstrators aiming to protest what they perceive as police brutality threw red paint on the memorial, which sits outside of Denver Police headquarters. Rogers says DPD brass told officers not to take immediate action.

As 9NEWS reports, Denver Police under Chief White have followed a less-confrontational policy when dealing with protest marches, identifying individual lawbreakers for later arrest as opposed to charging into crowds to break up illegal activities on sight. Our understanding is that in a life-threatening situation, police would still wade into a protest to restore order, but not for (as in this case) preventing petty vandalism committed by a small number of protesters. Two suspects have already been arrested over Saturday's incident. 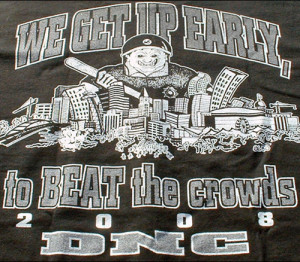 “We get up early to beat the crowds.”

Such a policy becomes more important to strictly adhere to, though we'd say it always should be important, when police respond to a protest against police brutality. In addition to the nationwide headlines in recent months over the issue of police killings and beatings of unarmed citizens, DPD itself has a long and unsettling record of police brutality–and a culture of mutual silence and protection among police officers accused of misconduct that has made cracking down on the problem very difficult. Repeated, well-publicized instances of obvious misconduct by Denver police, both in the commission and concealment of violence against undeserving citizens, have severely eroded the trust of the community they serve. Accountability for Denver police accused of misconduct remains slow, uneven, and too often dependent on the media forcing the hand of officials.

Bottom line: everything we have heard about Chief White suggests that he is genuinely committed to reforming both the public image and internal culture of the DPD, and this reflects creditably on Mayor Michael Hancock for appointing him. However emotional police officers may be about this memorial to fallen officers–and we don't want to disparage that legtimate sentiment–it would absolutely have been the wrong decision to break from established policy and violently charge into this crowd over what amounts to petty vandalism.

Chief White told rank and file that he found the vandalism "abhorrent" but said "I believe the decision we made was appropriate."

"The message I got was you, as a police officer, are not as important as our image," Rogers says.

In early December, several Denver Police officers were injured, one critically, in an unrelated car accident that followed a large walk-out of students from East High School protesting against police brutality. The same Denver police union at that time circulated rumors that students had jeered the injured officers, which was not corroborated by any of the numerous media outlets on scene or witnesses other than Denver police. The story made for good mythmaking on FOX News, but locally, it wasn't good for the police union's credibility. In this case, calling for the chief of police to resign for following his established policy, and not giving in to emotion where it could make his job harder in the long run, makes Chief White look like a hero.

As for the Denver Police Protective Association? Maybe it's time they reflect on who they're really supposed to be protecting. Because whether they realize it or not, this is not the "image" they want.