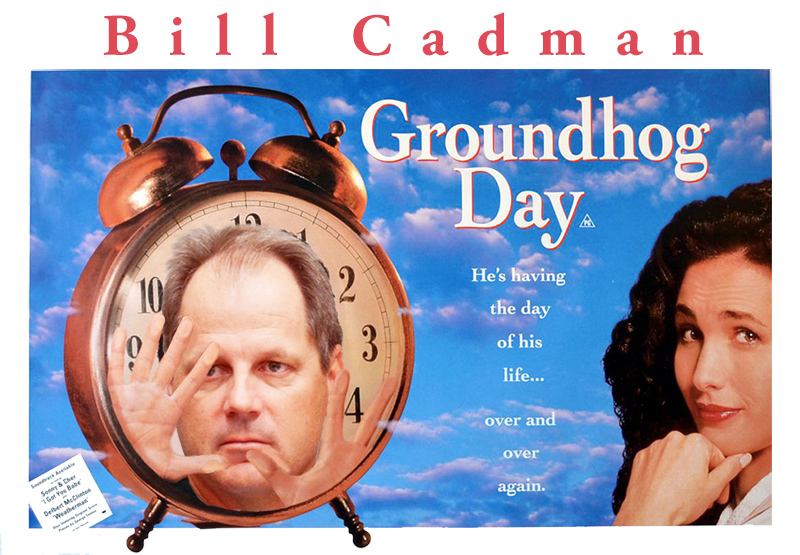 The Denver Post's Lynn Bartels previews tomorrow's main event at the Colorado state capitol–debate on five House and two Senate bills to repeal or otherwise weaken gun safety laws in Colorado, including the repeal legislation passed in 2013 to require background checks on most transfers of guns and restrict gun magazine capacity to 15 rounds.

It's appropriate that Monday is Groundhog Day because the legislature is going to hear a slew of gun bills that will bring back memories of 2013.

It's too early to know whether drivers will circle the Capitol, horns honking, or whether a plane will fly overhead with a message for Democratic Gov. John Hickenlooper, all of which happened two years ago. But among the seven bills to be presented by Republicans, three will try to overturn some of the most debated measures of that session, which involve ammunition magazines and background checks.

In 2013, the debate over gun safety bills consumed a large part of that year's legislative session. The fight over bills introduced in the wake of the Aurora and Newtown, Connecticut mass shootings the prior year was by far the most contentious seen at the capitol in many years on any subject, with families and survivors affected by gun violence pitted in emotional testimony against irate and heavily misinformed (see below) supporters of gun rights. Over several days throughout the session, gun rights supporters staged noisy and disruptive rallies, flew a banner over the capitol that read "Hick–don't take our guns," and circled the capitol in caravans of vehicles blaring their horns.

One of the most important things to understand about the fury from gun rights supporters in 2013, which may or may not be repeated in the capitol in the coming days, is that it has always been heavily based on deliberately incendiary misinformation about what the laws in question actually do. This is most easily demonstrated in the case of the universal background check law, House Bill 13-1229. During last year's debate over a bill to repeal this law, Victor Head, the principal organizer of the successful recall campaign against Sen. Angela Giron, testified that telling voters this law would prevent transfers between immediate family members–his examples was one's "brother"–was highly persuasive in getting them to sign the recall petition. Likewise, Bartels quotes the sponsor of this year's universal background check repeal bill, Rep. Janak "Dr. Nick" Joshi, claiming that transferring a gun "within a family" is not permitted without a background check:

"If someone wants to transfer a gun within a family, [Pols emphasis] or transfer heirloom guns or antique guns, [Pols emphasis] why do they need to pay for a background check when it's a Second Amendment right?" said Rep. Janak Joshi, R-Colorado Springs.

It appears that the sponsor of legislation to repeal universal background checks is not aware that transfers of guns between immediate family, as well as transfers of antique guns as defined by federal law, are allowed without a background check. Two years after its passage, Rep. Joshi is simply not telling the truth about what this law does. When Victor Head admitted that he used this same outright lie to get recall petition signatures, the controversy that ensued in the local press resulted in clarification from Gov. John Hickenlooper's office that yes, transfers between family members are perfectly legal under HB13-1229.

So why is Joshi still saying the opposite? And why doesn't this news story check his facts?

Much like 2013, the gap between the bad information that's been purposefully fed to gun owners, often through a complicit and/or lazy local media, and the reality of the legislation being debated is the biggest problem Democrats face. Two years ago, local conservative huckster Jon Caldara received national attention for a Youtube video in which he claimed that passage of the magazine limit bill, House Bill 13-1224, would mean "almost all guns in Colorado will never be able to get a magazine again." Sen. Kent Lambert announced from the floor of the Senate that with passage of these bills, Colorado had "effectively banned gun ownership." None of these statements were even remotely true, but for reasons that have baffled us ever since, no one in the local media would report the simple fact that these were provably false statements.

Another argument we expect to see tomorrow is that these laws are "unenforceable." The fact is, there is no law in existence with 100% compliance, but we know that hundreds of criminals have been prevented from buying guns via universal background checks since 2013. On the magazine limit, there is evidence to suggest that some gun sellers and gun owners are not complying. But we can trace lack of compliance to former Sen. Greg Brophy–who said flat-out from the well of the Senate that "I will not obey this law," or the announcement by many elected county sheriffs that they would not enforce it. And that, to put it charitably, is not the fault of the law. That is lawmakers, and politician law enforcers, making a mockery of their responsibilities, and openly instructing their constituents to do the same.

Bottom line: tomorrow's (possible) onslaught from gun rights supporters will be at least partly based on misinformation that has been circulating uncorrected for years. There is legitimate room for debate on the appropriate regulation of guns in a free society. Unfortunately, during and since the passage of these bills in Colorado, there has not been a legitimate debate.

If we see any sign of one this year, we'll let you know.