Bob Beauprez Needs to Sell a Shitload of Buffaloes 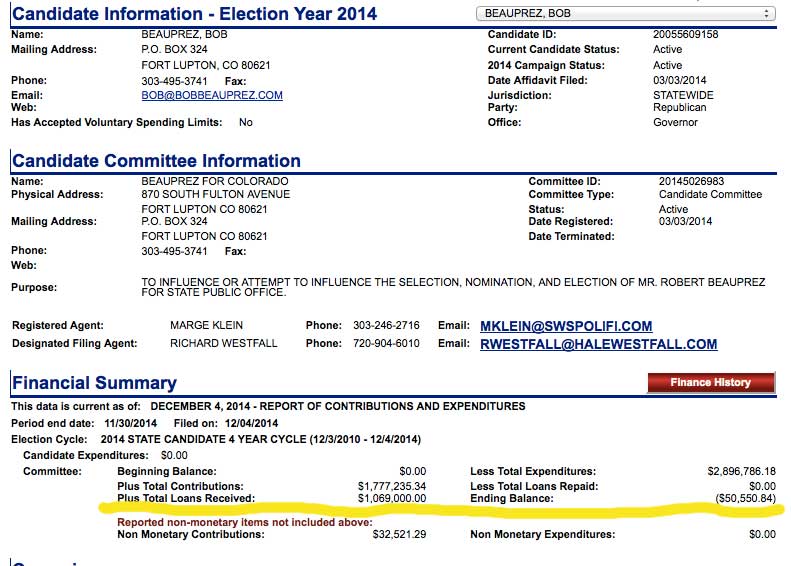 Colorado Republicans are preparing for a tough campaign for State Party Chair now that Steve House has made it clear that he will challenge two-term Chair Ryan Call in March. There are many reasons why Call is facing a challenge despite a pretty successful 2014 election cycle, but much of the debate involves how money is being spent by the State GOP.

There are two main financial questions that are playing a significant role here. The first, which we've discussed before, is a debate about whether or not the State Party Chair should continue to earn a hefty monthly salary; Call is paid about $8,300 per month by the State Party, and many of the GOP faithful would like to return to the pre-Dick Wadhams era when the Chair earned only a small stipend.

The second big financial question is about whether the State Party should assist former gubernatorial candidate Bob Beauprez in paying off more than a million dollars of campaign debt. The Republican buffalo rancher — that would be Beauprez — has nearly $1.1 million in outstanding loans from his campaign. Beauprez's campaign committee is also $50,550 in the red, a balance that must be taken care of at some point.

Most of the money loaned to Beauprez's campaign came from his own checkbook, and there is some debate about whether or not the Republican Party should help him raise money to refresh his own coffers. There is also some question about whether Beauprez had a deal with Call to assist him in paying off his rather large campaign debt. Throw in the question of whether Republicans funded efforts to kneecap gubernatorial candidate Tom Tancredo, and you can see where this starts to get complicated.

That this discussion is even taking place is somewhat odd when you consider that the ability to finance a campaign was the #1 selling point of Beauprez as the Republican nominee for Governor; the vast majority of his support in advance of the June Primary came from the knowledge that he was the only GOP candidate with any hope of raising serious money.

It was because Beauprez was able to write checks to himself that Republicans decided to give him another shot at the nomination — should those same Republicans now help pay off Beauprez's debt even though he didn't win in November? The answer to that question may well determine whether Ryan Call still has a job in March.