A photo taken yesterday by Scott Kwasny, the communications director of the Jefferson County Education Association, captures–apparently by random chance–a lunch meeting between Jefferson County Board of Education President Ken Witt and the conservative presidents of several other school boards across the state at Lakewood's Jose O'Shea's Mexican restaurant: 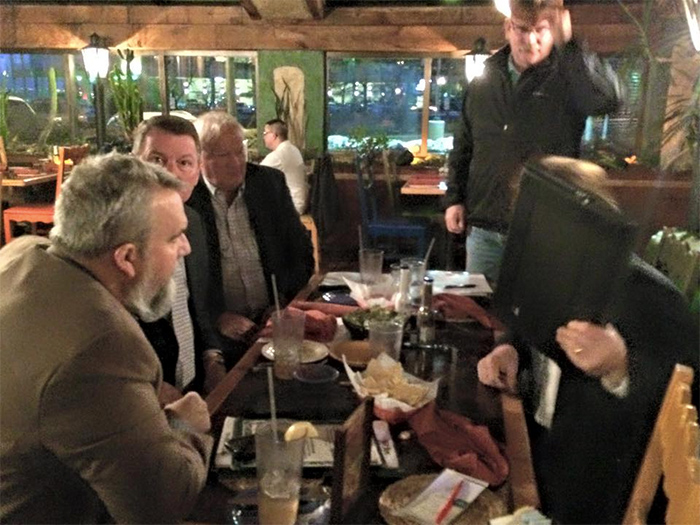 Witt is the guy hiding his face. We take Kwasny at his word on this, but you can also see Witt's blocky haircut poking out around his binder.

Kwasny identifies the other men in this picture as Kevin Larsen of Douglas County, Bob Kerrigan of the Thompson school district, Mark Clark of Adams 12 Five Star Schools, and Roger Good of Steamboat Springs–all conservative presidents of their respective school boards. According to Kwasny's Facebook post, the subject of discussion was teacher contracts.

To be clear, there's nothing illegal going on here, even though such a meeting raises obvious questions. These men all serve on different school boards, so they would not be subject to Colorado's open meetings law. The biggest problem with this photo is the optics–Ken Witt and the Jefferson County school board's conservative majority regularly insist that they are not coordinating ideological "Dougco-style" reforms to roll out in Jefferson County. He says so even after hiring the district's new superintendent out of Douglas County–but it's a matter of, you know, pretense.

Well folks, so much for that pretense.