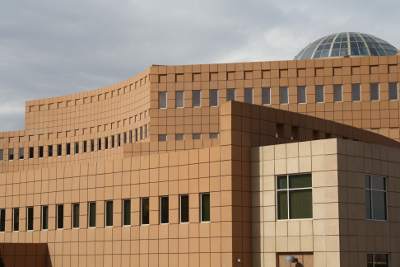 Jefferson County, Colorado has long been considered a bellwether–for the state of Colorado, and increasingly as a place where national political trends can be seen in action contemporaneous to or before they take hold elsewhere. The result in Jefferson County has predicted the winner in Colorado statewide races for long enough that the rule of "as Jefferson County goes, so goes Colorado" has become axiomatic for politicos in this state.

This year, Republican U.S. Senate candidate Cory Gardner narrowly defied this rule, losing Jefferson County by under 1,000 votes but winning the election statewide. The reasons for this have more to do with dynamics across Colorado that hurt Democrats, a hardening of partisan battle lines that robbed Mark Udall of swing independent and moderate Republican votes other Democrats in recent elections have won over. Looking at Udall's performance compared to Gov. John Hickenlooper, who carried Jefferson County and the state by a much greater margin than Gardner, there's a case to be made that Udall's collapse in September and October was more attributable to Colorado voters rejecting him personally–or at least his campaign's heavy focus on abortion–than Democrats generally.

In Jefferson County, the 2014 elections took place against the backdrop of major unplanned controversy created by a new conservative school board majority. The 2013 election's big story in Colorado was the absolute slaughter at the polls of Amendment 66, an education tax increase. Amendment 66, in turn, turned out conservative voters all over the state, including in Jefferson County where three hard-right conservatives were elected by a landslide to form the new majority on the Jeffco's five-seat school board.

The new Jeffco school immediately set to work on a sweeping, highly politicized agenda of conservative reform proposals. After butting heads with the teacher's union over pay issues, the new board pushed through the hiring of a new superintendent from Douglas County–the same far-right dominated union-busting school district presently mired in court battles over their insistence funding religious schools that the new school board promised would not be their "model" for "reforming" Jefferson County Public Schools.

In September, the conflict in Jefferson County went national–in fact international–when word surfaced of a proposal from board member Julie Williams to review the district's AP history curriculum to ensure that it "promotes citizenship, patriotism, essentials and benefits of the free enterprise system, respects for authority and respect for individual rights, [does] not encourage or condone civil disorder, social strife or disregard of the law," and presents "positive aspects of the United States and its heritage." Williams is the sister-in-law of Sen.-elect Tim Neville, one of the most conservative incoming (and former) members of the Colorado legislature. With the power of the new majority, some of the fringiest actors in Colorado politics stood ready to impose their wacky will on one of the state's highest-performing public school districts.

As anyone who followed this story knows, thousands of students from across Jefferson County stormed out of class in massive and well-organized demonstrations against Williams' curriculum review proposal. At one point, the protests stretched for 22 miles along Wadsworth Boulevard, Jeffco's busiest surface street. Ultimately a weakened version of the curriculum review proposal was approved by the board without Williams incendiary language, but still one that gives Williams' political allies lots of board-sanctioned ability to make trouble. In the meantime, students and teachers are talking about the daunting logistics of recalling the new board majority, with a newfound understanding of the threat they represent.

So what does this mean for politics in Colorado's "political bellwether" county? It means something, for sure–but the full impact of the battle over public education in Jefferson County was not felt in 2014. This is not to say that Democrats didn't do their damndest to link the antics of the new school board with Republican candidates on the ballot–we documented numerous examples of hard-hitting TV spots and mailers linking Julie Williams to Neville, Laura Waters Woods, Tony Sanchez, Larry Queen, and others. It's likely that those ads made a difference, even if Neville and Waters Woods still won their races. It's clear that the prospect of having these protests turned against Republican candidates in Jeffco frightened GOP strategists at any rate, who responded with mailers intending to co-opt the protesters' message that were so desperate and shameless they left jaws agape.

In the end, 2014 was a year when the midterm political background noise may have helped conceal the long-term damage being done to conservatives in Jefferson County. In the worst electoral climate for Democrats in Colorado in many elections, Democrats actually did pretty well, enough to where Jefferson County if anything looks like less of a bellwether this election. If one bets that 2016 will not be the perfect storm for Democrats that 2014 was, and we believe that's a good bet, then key Jeffco races in 2016, like Sen.-elect Waters Woods in SD-19, would seem to be very ripe for flipping back to Democratic control. As for those thousands of student protesters? Many of them will be voters by 2016, at least some helped along by Colorado's new law allowing 16 year olds to pre-register to vote. Whether or not the conservative school board majority can be recalled is one question–but we expect their actions to ripple negatively for Jeffco Republicans for years to come regardless.

Bottom line: the role of Jefferson County may grow to something more than a bellwether in the coming years. As the state's fourth largest county by population, this is an electorate with enough heft to swing elections in Colorado–and this year, it's a county that (albeit narrowly) bucked the trend. That's not the same thing as a bellwether exactly, but in 2016, Democrats may have reason to celebrate Jeffco's bluer trajectory.