Expert Analysis: What Happened in Colorado in 2014?

The good folks at Hilltop Public Solutions, one of the leading Democratic-aligned political consultant firms in Colorado with offices across the nation, have put together a fascinating presentation analyzing the results of the 2014 elections in Colorado. We had the opportunity to view their presentation this week, and obtained permission to use their slides and data in a post. We doubt we can explain in a blog post as well as Craig Hughes and team can tell the story, but we'll try to give readers a sense of their conclusions. This is largely a data-driven explanation, but to be clear, it does come primarily from the perspective of Democrats. 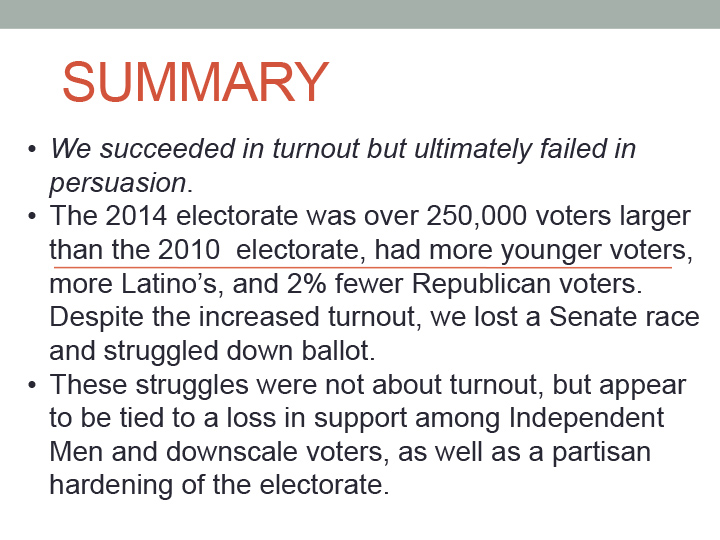 This slide dispels one of the major misconceptions about the 2014 elections. The fact is, Democrats turned out the votes they believed were necessary to win in Colorado, and did so in greater numbers than they had in the last midterm election in 2010. What Democrats didn't count on was a national political climate that Colorado has slowly caught up with in the years since President Barack Obama's election. In 2010, Democrat Michael Bennet won substantially more right-leaning independents and even Republican votes than Mark Udall did in 2014. Combine that with the sudden erosion of support for Democrats in formerly reliable blue areas of the state–Pueblo and Adams County–and you can account for much of the difference between Bennet's narrow win and Udall's narrow defeat. 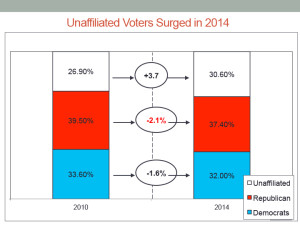 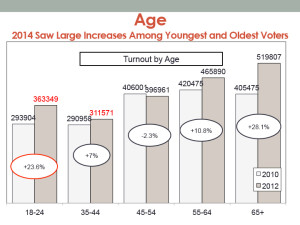 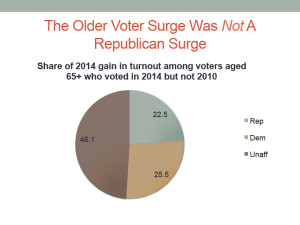 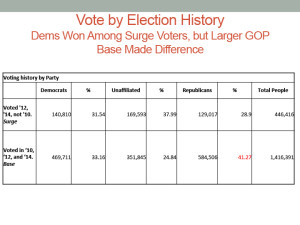 What you can see in these slides is analysis of the "surge" vote in 2014 midterms–voters who did not vote in the last 2010 midterms elections but did this year. As you can see, Democrats performed well among these lower-propensity voters, and it wasn't really what you'd call a "Republican wave" at all. But it wasn't enough to overcome the large Republican base in Colorado, which was much more unified behind Cory Gardner than the GOP was united behind Ken Buck in 2010. 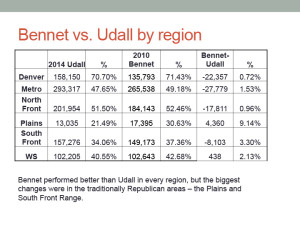 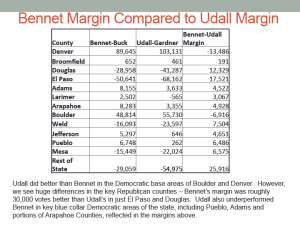 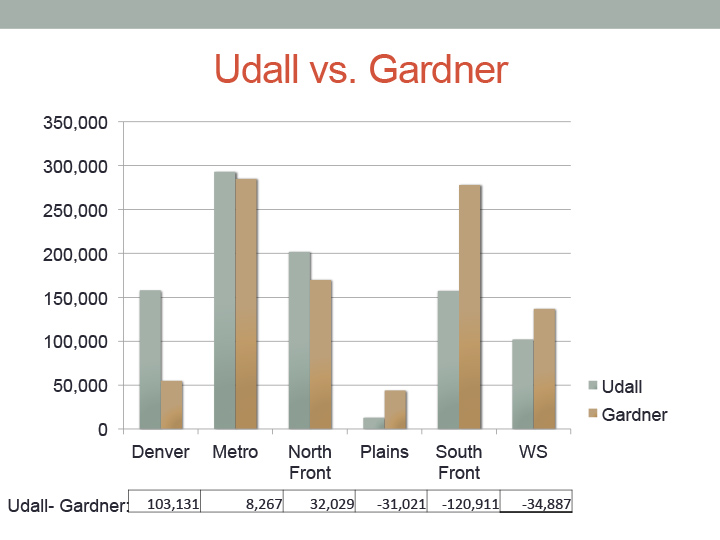 Here you can see comparisons between Michael Bennet's performance in 2014 and Mark Udall's in 2014 by region. The general erosion of support for Udall is evident just about everywhere except for Denver and Boulder–but by far most pronounced in the "South Front Range" region, Douglas and El Paso counties. It's a truism in Colorado politics that in order to win a statewide election, one most both win big in the areas of the state naturally aligned with you, and not lose too badly in the regions that are not. Many Democrats forget that the Republican bastion of El Paso County also contains a large number of Democratic and persuadable independent votes. If you don't win enough of those votes, winning the state is very difficult. And Mark Udall did not. 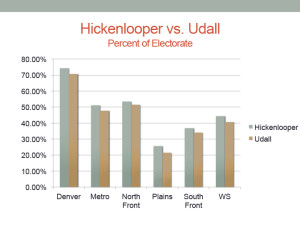 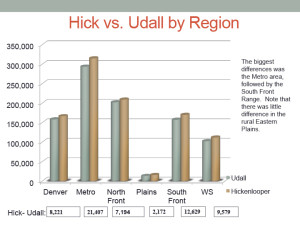 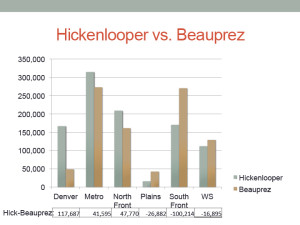 These slides provide a breakdown of Gov. John Hickenlooper's substantial outpolling of Mark Udall across the state. Hickenlooper outperformed Udall in every area of the state, especially in energy-friendly and otherwise conservative counties like Mesa, Douglas, and Weld. Hickenlooper still lost the South Front Range and Western Slope, but by smaller margins than Udall. 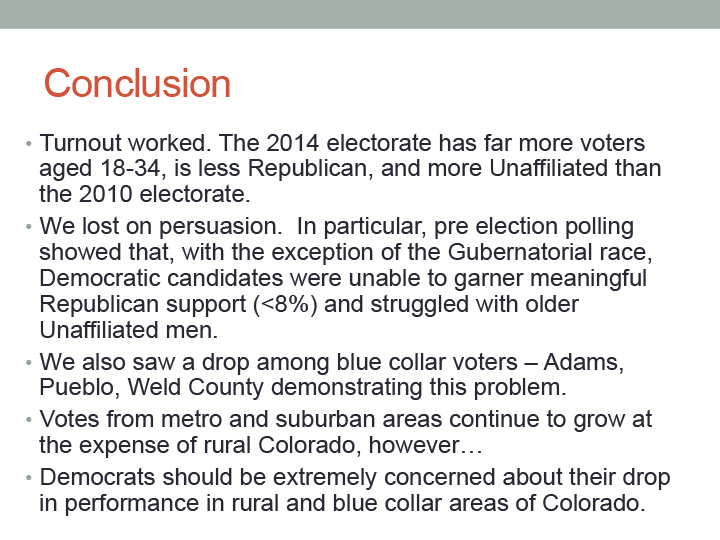 Bottom line: as this data shows, the Democratic field campaign operation in Colorado can again be considered a major success–improving turnout in many of the electoral segments considered most vital to Democratic victories. Working against Democrats in Colorado this year was a national political climate that has hardened partisan lines, and reduced the crossover vote by right-leaning independents and moderate Republican voters. Combine that with the precipitous decline in support among traditionally Democratic strongholds like Adams County and Pueblo, and the long term challenge faced by Democrats–especially in midterm elections–becomes indisputable.

What's the solution for Democrats looking ahead to 2016? Part of the road back is demostrated by Hickenlooper's winning positive economic message, which stood out against both Bob Beauprez's over-the-top scare tactics and Udall's one-note abortion attack strategy. Working and middle class voters need to be reassured that Democrats have their best interests at heart: they know Republicans are looking out for the wealthy, but there is a persistent sense among blue-collar voters evinced in these numbers that Democrats are only interested in the very poorest citizens–leaving middle and working class voters feeling like they have no advocate at all in today's politics. We're not saying this impression is accurate; but it's increasingly undeniable that it does exist. And for Democrats, future victory in Colorado depends on bringing these voters back into the progressive coalition.

See view Hilltop's presentation in its entirety, click here. And many thanks again for allowing us to share this excellent analysis.