How Do We Get This Done? 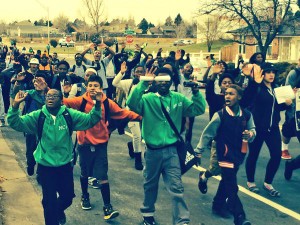 In 1992, I watched in horror as the jury of Rodney King failed to convict the police that beat him, a black man. Even with the video, the all-white jury said that no crime was committed. At 27 years old, I felt like my world fell apart. How could the people in my generation not see this as crime? How was it possible that in 1992, as I watched Los Angeles burn, I was dealing the same disappointment my father dealt with in 1965, as he watched Watts burn.

I was sure, in my 27-year-old mind, that I had seen the last of racial inequality. In the days, weeks and years that followed Rodney King, I watched the LA police force systematically dismantled. I saw white people stand with black people and say this was wrong and we must do better as Americans. My young heart felt like that while America had failed to do the right thing for Rodney King, in the aftermath, we seemed to be learning and growing closer as a people.

I was wrong. Sign here if you want to see something change.

On November 22, 2014, a video released by the Cleveland police showed Officer Timothy A. Loehmann, 26, shooting Tamir Rice immediately upon leaving his police car on November 22. Investigators said 12-year-old Tamir was reaching into his waistband for a weapon — which turned out to be a toy pellet gun. The Cleveland police officer who shot and killed the 12-year-old last month resigned from a previous small-town police job when he was deemed emotionally unstable and unfit for duty, especially in his handling of firearms.

In July 2014, New York police officer Daniel Pantaleo choked unarmed black man Eric Garner to death, in broad daylight, while a bystander caught it on video. Despite the video, despite an NYPD prohibition of exactly the sort of chokehold Pantaleo used, and despite the New York City medical examiner ruling the death a homicide, a Staten Island grand jury declined even to indict Pantaleo.

In November 2006, a group of five New York police officers shot unarmed black man Sean Bell to death in the early morning hours of his wedding day. In April 2008, despite multiple eyewitness accounts contradicting the officers' accounts of the incident, Justice Arthur J. Cooperman acquitted the officers of all charges, including reckless endangerment.

In February of 1999, four plainclothes New York police officers shot unarmed black man Amadou Diallo to death outside of his home. A year later, an Albany jury acquitted the officers of all charges, including reckless endangerment.

These deadly acts of violence by law enforcement are dramatically different than the treatment we see of white violent offenders such James Holmes, the Aurora Theater shooter who killed 12 people and injured 47 others, who was apprehended alive. Let's also remember the case of Cliven Bundy, who while armed, backed up by other armed men, and trespassing on federal lands, confirmed he would kill law enforcement. As of today, Cliven Bundy has not been charged and is very much alive.

In my lifetime, the number of incidents appears to be getting worse. Which begs the question, what can we do as a progressive community?

What we need are immediate and dramatic systematic changes to policing:

• Every cop should have a body camera as required part of their uniform.
• Every police car should have a dash camera.
• Every cop should live in the neighborhood they patrol. We should get back to police being a part of the community.
• We should NEVER see a jury made up of less than 50% of the race of the defendant or the victim.
• Every police shooting should have special federal prosecutor. Clearly we cannot bring true prosecution when the prosecutor is acquainted with the judge and the cops.
• Immediately end the selling of military vehicles and equipment to local police. Americans are not enemy combatants and should NEVER be treated that way.

Now how do we get this done? Sign here if you think something needs to be done. And we'll come back to you in the future to make it happen.

Pot and Politics. Pretty much sums it up.
View all posts by Whiskey Lima Juliet →