Perry and I were having lunch at We The Pizza near the Capitol. Lost my appetite. #COPolitics pic.twitter.com/QQ9VbZP7Ti 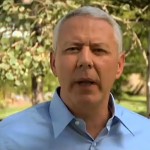 Last Thursday, Rep.-elect Ken Buck described to his social media followers an encounter with President Barack Obama at the Washington, D.C. pizza joint We The Pizza. As you can see above, Buck had a pretty negative reaction to the mere sight of the President, which can be reasonably interpreted as not encouraging partisan gridlock-wise. You might also reasonably ask what exactly about the nation's first President of color elicits such a physical reaction from Rep.-elect Buck, to which he and his defenders will respond indignantly. Why should Buck even dignify that with a response?

Judging from just this Tweet, we expect most will have a reaction based mostly on their pre-existing view of Ken Buck. If you like him, you'll be inclined to interpret this charitably. If you don't–maybe you remember from the 2010 Senate when he said being gay is like alcoholism, or the story about that rape victim's "buyer's remorse"–you're probably doing to assume the worst.

On Facebook, it should be noted that Rep-.elect Buck elaborated a little more:

Perry and I were having lunch at We The Pizza near the Capitol before catching a plane. Secret Service shut down the restaurant and Pres Obama joined us for lunch. Obama was preceded by 20 Hispanic students for a photo op. Lost my appetite [Pols emphasis] but got a great story to share. Obama needed 35 Secret Service agents for a piece of pizza. I hope Michelle doesn't find out the Pres was eating bad food.

So, we're going to be as charitable as we feel we possibly can be, and give Buck the benefit of the doubt that the "20 Hispanic students" had nothing to do with his loss of appetite? Let's leave that at "we hope so." Some of our readers will not, and we honestly don't blame them.

Unfortunately, there is a more basic problem here.

As the AP reports, those "20 Hispanic students" were not Hispanic.

Hours before addressing the nation on immigration, President Barack Obama left the White House for lunch.

The president and first lady Michelle Obama were taking in a midday meal with young people from the Standing Rock Sioux Reservation in Cannonball, North Dakota. [Pols emphasis] They were dining on pizza and burgers at adjoining restaurants on Capitol Hill; We, The Pizza and Good Stuff Eatery.

That's right, it's the age-old pitfall for the racially insensitive, the brown skin=Hispanic fallacy! Knowing this little detail makes the charitable interpretation of Rep-elect Buck's comments we theorized above, about losing his appetite at the sight of Barack Obama and/or whatever relationship his loss of appetite may have had to those 20 Hispanic Native American students, substantially more difficult. There's really no way Buck comes out of this without some kind of ugly side in plain view–it's just a question of how ugly.

And he hasn't even been sworn in yet, folks.