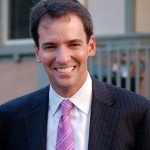 U.S. Rep. Mike Coffman will return to Congress after facing a difficult challenge from former state House Speaker Andrew Romanoff in a race that cost nearly $16.5 million, according to Sunlight.

Romanoff outspent Coffman by more than $1 million through Oct. 15. But Romanoff faced a barrage of attacks ads from the National Republican Congressional Committee.

Fish offers this handy graph to show how Democrats outspent the GOP in CD-6 this year:

The final result of the CD-6 race this year contrasts against two years ago, when underfunded underdog Democratic state Rep. Joe Miklosi ran against Coffman and lost by only two points. There is of course the difference in the electorate between 2012 and this year, but not enough to fully account for the difference in the two outcomes. It's clear, based on polling in downballot races in the same district this year in addition to the difference from 2012, that Democrat Andrew Romanoff substantially underperformed in this race.

For us, watching the much better-equipped Romanoff get beaten so handily was akin to the experience of 2011's Proposition 103 versus last year's Amendment 66. Both school finance tax increase measures, Proposition 103 ran a shoestring campaign with almost no money while Amendment 66 had a $10 million war chest. The rest, as our readers know, is history: all the millions spent on Amendment 66 didn't move the needle a bit over Proposition 103's defeat.

The lesson in both? Money has to be there to win, but it can't save you from yourself. Despite Romanoff's surprisingly strong ability to raise money for this race, as a candidate he repeatedly failed to either distinguish himself or capitalize on Coffman's weaknesses. Romanoff's message, like the in-retrospect bad idea to kick off his campaign with a right-leaning "balance the budget" theme, failed to motivate the Democratic base. And as we saw in the U.S. Senate race, Coffman's willingness to audaciously reinvent himself ran laps around Romanoff's capacity to discredit him.

Democrats we've talked to since Tuesday night remain convinced that CD-6 is a pickup opportunity for the right Democratic candidate in the right year. In hindsight, might Karen Middleton have run a better race? In 2016, Democrats get another shot at Coffman–and with Coffman now very much aware of the perennial threat in his swing district, they'll need to make that one count. The more distance Coffman can put between his hard-right conservative past and his new "moderate" image, the harder it will be to ever dislodge him.