Seriously, Walker, You Should Probably Stop Doing That 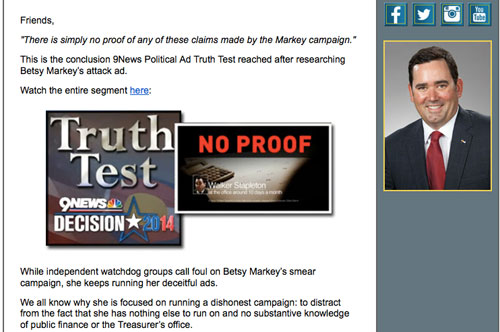 This email sent out by Stapleton’s campaign on Thursday wants to make sure you know that he is being accused of not showing up to work.

Republican State Treasurer Walker Stapleton is clearly worried about recent polling results showing that he is perilously close to losing his re-election bid to Democrat Betsy Markey. Questions about Stapleton's apparent disinterest in actually showing up to his office seem to have hit a sweet spot with voters, and Markey wasted little time getting right to the heart of the issue in her first TV ad:

State Treasurer Walker Stapleton. Official key-card records from his Denver office confirm… Stapleton only bothers showing up at his office around ten days a month.

Often, skipping the office for weeks at a time. Or only showing up after three P.M.

For those who have yet to see the ad, worry not. For some completely inexplicable reason, Stapleton and his Republican pals are doing everything they can to make sure you are aware of the accusations against him. On Thursday, Stapleton's campaign sent out an email linking to a 9News "Truth Test" about Markey's ad; while 9News says there is "no proof" to the claims made in the ad, the "Truth Test" doesn't exactly set Stapleton free:

It's important to note that we can't prove the Markey campaign's claim wrong, either.

We asked Stapleton to respond and he called the attacks "total B.S." in a phone interview with 9NEWS.

"I don't bring my key card into work every day," said Stapleton. "And when I don't, the public entrance is closer to my car than the other entrances and sometimes people open the doors for me. The main point is every single day that I'm in Denver on my schedule I'm in the office. [Pols emhpasis]. And to suggest otherwise is a complete bold-faced lie."

The campaign for Democratic challenger Betsy Markey sent us plenty of other items to back up their theme, including a scheduling calendar and attendance records at board meetings.

None of these items prove the claims in their ad.

Come again? "The main point is every single day that I'm in Denver on my schedule I'm in the office." What the hell does that mean? He's always in his office, if he's in Denver…and if it's on his schedule? WTF?

Look, we get that Stapleton believes his campaign is in trouble, in large part because of Markey's ad, and that he wants to do whatever he can to dispute the allegations. However, if Stapleton can't prove them wrong, he should probably shut up about this. Markey doesn't have millions of dollars to saturate the air waves in a down ballot race like State Treasurer, so it seems pretty obvious that the best course of action is to just ride this out while coming up with your own separate messaging.

Stapleton has long been mentioned as a potential Republican candidate for Governor in 2018, so perhaps he's trying to diminish this attack for reasons beyond 2014 (although, at this point, we'd wager that Stapleton has pretty well disqualified himself as a serious challenger for Governor anyway). Whatever the reasoning, the logic is flawed; the best way to deal with damning allegations is usually not to keep bringing them up on your own.

Have you ever known someone who gets a bad haircut and is so worried about appearances that they can't stop talking about it? That's pretty much Walker Stapleton in a nutshell.