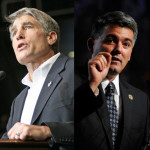 The question of whether or not polling of Colorado voters is accurately sampling the 2014 electorate is perhaps the biggest unknown in the current election cycle. In Colorado's U.S. Senate race, polling has shown Republican Cory Gardner with a small but consistent lead since the beginning of October. The Real Clear Politics average of polling in the race as of now shows Gardner ahead by three points.

But is that really what's going on? History says very likely not. Almost exactly four years ago today in October of 2010, a Reuters/Ipsos poll showed then-GOP Senate candidate Ken Buck leading appointed Democratic Sen. Michael Bennet by three points. In fact, every poll taken entirely in the month of October of 2010 showed Ken Buck leading or the race tied. At the end of the race, the RCP average predicted that Ken Buck would win by three points.

Michael Bennet is our junior U.S. Senator. So obviously, the polls were wrong. In the 2010 U.S. Senate race, the polling consistently got the sample of "likely voters" wrong, which proved to be their undoing. Polling underestimated the role of women voters in particular, who went for Bennet by a 17-point margin and in so doing decided the race.

Is it going to happen again? Democrats not prone to spin tell us there's a good chance.

Two Democratic internal polls made public this weekend, one from the Mellman Group and another from the Benenson Group, both show Udall with a three-point lead over Gardner. Mellman has the race at 44-41%, and Benenson has Udall up 47-44%. Both samples are similar on party breakdown: 38% GOP, 32.5% Democrats, and 29.5% unaffiliated/third party in the Mellman poll, and 38% R, 33% D, 29% U in the Benenson Group poll. The Mellman poll release included no crosstabs, but in the Benenson poll we can see a 17-point lead for Udall with women voters (sound familiar?) and a whopping 22-point lead with Latino voters.

Last week, we discussed the results of a survey of Latino Colorado voters that showed Gardner distantly underwater, by an even greater margin than is shown in this polling. That came just after the lead pollster at SurveyUSA very candidly admitted that his organization and most other pollsters don't know how to properly sample for Latino voters–a critical defect in a state where 21% of the population is Latino. If 2010's experience is any guide, the recent polls showing a paltry lead for Udall with women can straightforwardly be questioned.

Bottom line: these variables are enough to flip the race. Just like 2010. Right out from under the pollsters.

If that doesn't happen, we'll take our lumps. If it does, though, we expect the pollsters to take theirs.