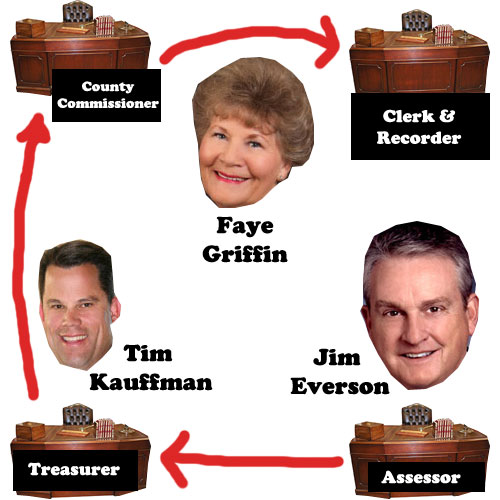 Jefferson County voters may be familiar with the name Faye Griffin, in large part because her name has been on a Jeffco ballot since the dawn of time. The 75-year-old Griffin is both allergic to the concept of "term limits" and more than willing to let the rest of the GOP county government trade on her name ID in order to retain any elected position for as long as possible.

As we first noted last November ("Finish Your Damn Job, Faye Griffin"), Griffin is a serial office jumper. Currently in the middle of her second term as Jefferson County Commissioner, Griffin is running (again) for County Clerk & Recorder; if she is successful in November, she will have held 4 separate elected positions in one 8-year span, and failed to finish her elected term for the second time in five years. More importantly for Republicans, Griffin's constant movement should allow two other term-limited Republicans a chance at holding a new office without having to go through an actual election — a pretty sneaky way to get around those pesky "voters" in Jeffco.

If Griffin is elected Clerk & Recorder (which is likely because of her high name ID that plays a major role in a countywide vote), that will create an immediate opening for a spot on the Jefferson County Board of Commissioners. The term-limited Treasurer Tim Kauffman would then likely be appointed by a Republican vacancy committee…which would leave Kauffman's Treasurer seat open for another GOP vacancy committee selection (likely to be the term-limited County Assessor Jim Everson).

And thus, with the election of Faye Griffin, Jeffco Republicans can avoid open-seat election battles for two other county jobs. Furthermore, Griffin has indicated that she may retire soon, which would open a vacancy for Clerk & Recorder that would be filled via…a Republican vacancy committee!

You can see Griffin's many moves over the years in the list below (after the jump). This is frequent occurrence in Jefferson County — Kauffman himself was appointed Treasurer when Griffin left that office to run for County Commissioner in 2008. But as Republican control over countywide elections continues to fade in Jeffco, the powers behind the curtain are doing everything they can to hold on to any office at the "Taj Mahal."

Thanks for the Job, Faye Griffin!
– 1998-2006: Griffin elected twice as Jeffco Clerk and Recorder
– 2006: Griffin elected County Treasurer (4-year term)
– 2008: Griffin ditches Treasurer's office to run for County Commissioner. Republican-controlled Commissioners appoint Republican Tim Kauffman to fill remainder of Griffin's term as Treasurer.
– 2010: Republican Tim Kauffman elected to full term as County Treasurer
– 2011: Republican Commissioner Kevin McCasky resigns his seat to take a high-paying job leading the Jefferson County Economic Council (an Independent Ethics Commission later slapped McCasky with a violation for persuading the county to increase its contribution to the Economic Council without informing them that he was seeking the head job). Republican Party vacancy committee appoints John Odom to finish remaining two years of McCasky's term.
– 2012: Griffin re-elected to another 4-year-term as County Commissioner. Democrat Casey Tighe defeats Odom for District 2 Commissioner seat; Odom was so disinterested in the job that he was rarely seen in office and made virtually no effort to win election to a full term despite his name ID advantage.
– 2013: Griffin announces that she will run for Jeffco Clerk and Recorder again in 2014. For the second time in 5 years, Griffin intends to leave an elected position halfway into the 4-year term that voters approved.