Making Julie Williams The Face of The GOP 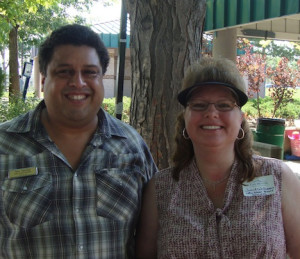 As the months-long protests against actions of the new conservative Jefferson County school board majority have raged on, and in the last few weeks gained international media coverage, we've tried to stay focused on the next logical question for a political blog–what effect these highly visible and popular protests will have on next month's elections. Jefferson County is considered one of the state's (and for that matter, the nation's) foremost political bellwethers, and a win in Jefferson County is generally considered to be mandatory to winning any statewide race.

In addition to the general fact that the Jeffco school board is now controlled by identifiably partisan Republicans, board member Julie Williams has close ties to the Neville family of well-known conservative Republican Jefferson County activists. As Williams has emerged as the central figure in the recent AP history curriculum review controversy, her personal connections to Republican state legislative candidates–along with the damage to the GOP brand her proposal caused just ahead of a major election–are a legitimate concern for Republicans who want to win elections next month.

As FOX 31's Eli Stokols reported last night, Democrats are doing what they can to bring about the GOP's worst-case scenario:

In a new television ad, Colorado Democrats attempt to draw a line between the three conservative Jefferson County School Board members whose effort to square the district’s AP U.S. History curriculum with their idea of “American exceptionalism” has sparked weeks of protest, with four Republican state senate candidates looking to oust Democratic incumbents.

The Democratic Senate Campaign Fund, an initiative of the Colorado Democratic Party, is behind the ad, the most serious effort yet to leverage the ongoing controversy over the Jefferson County School Board into a political advantage in next month’s election.

The group is betting that swing voters in Colorado’s biggest bellwether county will side with the students and teachers who have protested the board’s move — and that linking four GOP senate hopefuls to the conservative board majority could swing these competitive races that are certain to affect the balance of power within the Capitol’s upper chamber come January.

“Jefferson County families are against the extreme Tea Party slate pushing their ideological agenda on families. That’s not how we do things in Colorado, said Andrew Short, the DSCF’s executive director. “They have nationally embarrassed us and they will pay for it in November.” [Pols emphasis]

Tim Neville’s sister-in-law, school board member Julie Williams is trying to push her extreme agenda into the State Senate. She has the backing of her brother-in-law, Tim Neville and is also supporting Laura Woods, Tony Sanchez, and Larry Queen.

“We stand on the side of students, parents, and teachers – and against the extreme Tea Party agenda.  This isn’t about party politics.  This is about what is right.  The Tea Party won all the Jefferson County primaries last June and is now pushing their ideological agenda on Jefferson County families. This will not be accepted by middle of the road, Jefferson County voters,” said Short.

Beginning with a pop quiz, the ad asks, “The censoring of textbooks and rewriting of history recently resulted in public protests, where?”  The answer is Jefferson County.  The ad outlines how the new school board extremists nationally embarrassed Jefferson County families. It also highlights Julie Williams’ support for the Jefferson County Tea Party slate for State Senate.

Williams' original proposal to review Jeffco's new AP history curriculum to ensure it "promotes patriotism" and does not "encourage or condone civil disorder, social strife or disregard of the law" was, it's safe to say today, politically disastrous. The literally worldwide attention it received precipitated anger that transcended party lines–at least with the overwhelming majority created by Democrats, independent voters, and yes, even Republicans who draw a bright white line at political censorship of history. It's another case where this new majority has tried to impose a right-wing agenda item that's simply out of step in a moderate place like Jefferson County. And with so much bad blood between this new board majority and the community already, stripping the review committee proposal of Williams' incendiary language did little to assuage fears.

Voters can already see, and will find it easily if they haven't, that this is a partisan political battle unfolding. The ad above supplies important data points that connect what's happening on the streets of Jefferson County with Republicans on the ballots going out next week.

We'll say it again: as Jefferson County goes, so goes Colorado. There is a possibility, and it is growing, that Republicans well above the county level will pay a dear price for Julie Williams on Election Night.