"Congressman Beauprez has picked sides in the Jefferson County education fight. Not surprisingly, he chose the tea party school board members over parents, teachers and students. Asking our students to wait until the next election to be taught America's rich and incredible history is out-of-touch. To best prepare our children to be our nation's next generation of leaders, they should be armed with the facts, not just the limited and ideological agenda of the tea party extremes." 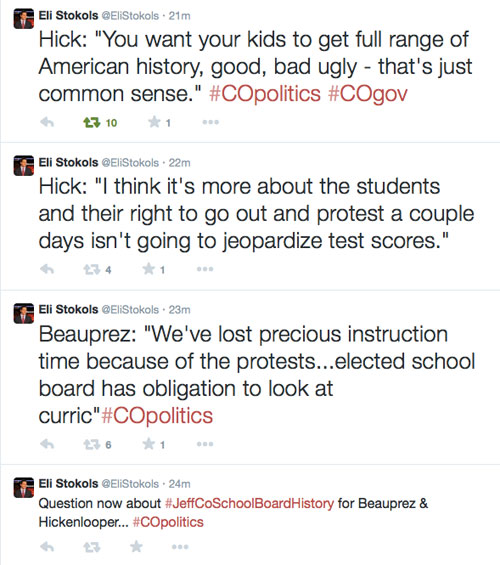 The Denver Metro Chamber of Commerce is currently hosting a debate between Gov. John Hickenlooper and Republican challenger Bob Beauprez. Politico reporter Manu Raju is moderating the discussion, which you can follow at Politico.com/LIVE or via Twitter under the hashtag #copolitics.

Just a few moments ago, Raju asked a question about the controversy surrounding the Jefferson County School Board, and Beauprez is apparently convinced that it is a smart idea to be critical of the thousands of students, teachers, and parents who have been protesting a proposal to change the curriculum for certain history classrooms. Last week, Beauprez said in a radio interview that teachers are "manipulating" students to walk out of class and join the protests — a comment that echoed Jeffco Superintendent Dan McMinimee and the right-wing School Board. When given another chance to give a different answer to a similar question…Beauprez doubled-down instead.

Here's how Beauprez's answer sounded from the Twitter feed of Fox 31's Eli Stokols (image at right): "We've lost precious instruction time because of the protests…elected school board has obligation to look at [curriculum].

We can't even begin to speculate as to why Beauprez and his campaign team think this is smart approach to answering a question about a subject that has made national headlines for more than two weeks. As we all know, Jefferson County is THE bellweather county in Colorado, and it is essentially impossible to win a statewide race if you don't win in Jeffco. It is also considerably harder to win in Jeffco when your basic response is no more detailed than, Go back to class!

From a political standpoint, this isn't a difficult question to answer correctly. Just take a look at how Gov. HIckenlooper answered to see what Beauprez should have done instead.