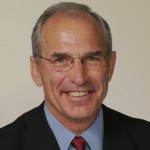 In an interview on KOA 850-AM Tuesday, gubernatorial candidate Bob Beauprez sharply criticized Jeffco students and teachers who've been protesting against a proposed curriculum review, the conflict is really about merit pay for teachers, not the curriculum.

Asked what message he has for "students, parents, teachers, and administrators in the Jefferson County school district," Beauprez said, "Get back to the task at hand, and that’s instructing the kids."

"This [protest] supposedly was about curriculum," Beauprez told KOA, touching on the topic of tonight's meeting of the Jefferson County School Board, "But I think it’s a long ways removed from curriculum. I think it’s really just a manifestation of the ongoing battle between the school board and the teachers’ union over pay, and in this case, merit pay. The curriculum is a very secondary issue."

In particular, Beauprez implied that Jeffco students were being manipulated by teachers, calling the student actions a "teacher-encouraged protest."

Asked what role the governor should play in the dispute, Beauprez aligned himself with the Jeffco Schools' Superintendent, and he sounded (see below) as if he believes gubernatorial intervention would be justified if the conflict continues.

Beauprez said it's now "very close to that moment in time when the legitimate requests and needs of the parents and the students are not being met, and teachers are not meeting their contractual obligation to be in that classroom teaching kids."

The Colorado Indpendent's Tessa Cheek reported Tuesday that Jeffco parents were upset by simlar, but less strident, comments Beauprez made in a recent speech. Cheek reported:

“What we’ve got going on in JeffCo right now is a bit of a complicated situation,” Beauprez said in a forum at Metro State college on Friday.

The comment hit a nerve for Shawna Fritzler. She’s a registered Republican with a nine-year-old daughter who attends a JeffCo public school. She’s also the president of her school’s Parent Teacher Association and a citizen-chair of the JeffCo public school’s planning and advisory council. She said she is frustrated to see a top-of-the-ticket politician weigh in during an election year without enough context.

“Bob Beauprez says to take it to the ballot box,” she said. “You want me to wait three more years of my nine-year old’s education? My daughter has to wait for an election? That’s asinine.”

On KNUS radio this morning, conservative Dan Caplis said he believes "all of this theater is geared to the launch of a recall election" of the Jefferson County School Board.

FEMALE INTERVIEWER: Thanks for joining us, sir. What message do you have to parents, students, teachers, and administrators in the Jefferson County school district? [static, pause, technical difficulties] We seem to be having a problem with getting candidate Bob Beauprez on. We’re a little bit of delay difficulty, here. Some Technical issues here, on Colorado’s Afternoon News, at 5:22

MALE ANNOUNCER/INTERVIEWER: This is an important — you know, an important subject for folks out there in Jefferson County.

MALE ANNOUNCER/INTERVIEWER: Uh, the school board making some big decision. Of course, they’re going to be talking about this again on Thursday night.

FEMALE INTERVIEWER: Okay, I think we have him now, and I’ll repeat my message, just in case you didn’t hear me. What message do you have to students, parents, teachers, and administrators in the Jefferson County school district, sir?

BOB BEAUPREZ: Well, get back to the task at hand, and that’s instructing the kids. And that’s what people pay their taxes for. That’s what parents expect. That’s what children deserve. And frankly, that’s what, I know, that teachers took the job for. They want [to teach] children, or else they wouldn’t be there. This has been an on-going dispute, I think, between the teachers’ union and the school board over the merit pay schedule and particularly the pay as it relates to teachers that might find — might be found not quite measuring up to the standards that the school board expects them to achieve. Now, let me be clear. I’d like not to have to take sides on this one, but I do believe that the school board — an elected school board, any elected school board — they have a proxy from the voters and particularly the parents who send them there, to make sure that they’re speaking out and exercising judgment on their behalf. And that would include, from time to time, reviewing curriculum. This supposedly was about curriculum. But I think it’s a long ways removed from curriculum. I think it’s really just a manifestation of the ongoing battle between the school board and the teachers’ union over pay, and in this case, merit pay. The curriculum is a very secondary issue. When it crosses the line, is when instruction of children –uh, the students– starts being impacted, and clearly it is. You know, when you’ve got to close the high schools because of a supposed sick-out — we all get that joke — there’s something seriously wrong.

MALE ANNOUNCER/INTERVIEWER: So what role, if any, does the governor have in a situation like this?

BOB BEAUPREZ: Well, I’d like to leave it to local control as long as you possibly can. Uh, but we’re right up against now that the counting of students for the sake of reimbursing on a per capita basis, the amount of money that the state reimburses –sends back — to the school districts to fund education. That’s always an issue, and there never seems to be enough. But if we’ve got a sick-out, if we’ve got schools closed because teachers don’t show up, or we’ve got a whole lot of students missing because they’ve decided to walk out and join in the teacher-encouraged protest, that’s a whole different matter. So, at some point, I don’t know where that line is– I think a governor would know it when he sees it, but you’re starting to get, in my opinion, very close to that moment in time when the legitimate requests –needs–of the parents and the students are not being met, and teachers are not meeting their contractual obligation to be in that classroom teaching kids.

FEMALE INTERVIEWER: Thank you for your time, sir. That’s Bob Beauprez, candidate for governor. As for the count day tomorrow, across the state, the state department of education’s website show that there is a count day window that extends from 5 days before count day to 5 days after count day.

MALE ANNOUNCER/INTERVIEWER: And it’s important, because each student brings with them about seven thousand dollars. And so, [if] you lose the count — maybe even ten kids — you’re looking at a lot of money, there.