Coffman vs. Romanoff, Round 3: Live Blog! 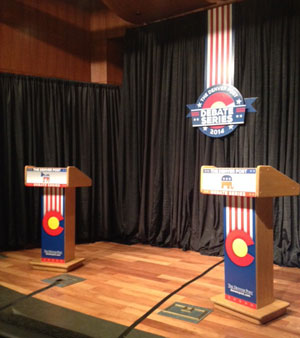 It has become something of a tradition here at Colorado Pols for us to give you, our loyal readers, a live blog, play-by-play of political debates in Colorado. Tonight we're at the auditorium in the Denver Post building for CD-6 debate #3 between Congressman Mike Coffman and Democrat Andrew Romanoff. (we covered Round 1 in Highlands Ranch with a Live Blog on Aug. 14.)

FINAL THOUGHTS:
Andrew Romanoff beat the absolute crap out of Mike Coffman tonight. It was almost unfair — Romanoff pummeled Coffman at every opportunity, while the incumbent largely just stood there quietly. This was stunning. Truly.

Romanoff goes first, says time for a change in Congress.

Coffman says Time magazine recently named him one of the most effective Members of Congress(?). "God Bless you for being here tonight, and God Bless the United States."

7:00 pm
Coffman gets to ask his final question of Romanoff. He flips through his notes for a moment, seemingly forgetting what he wanted to ask.

6:59 pm
Romanoff asks Coffman: What does "support" mean to you, since you claim to support issues you have opposed in your record.

Romanoff: "Thank God you haven't picked on my dog yet."

6:56 pm
Time for candidates to ask their own questions.

Romanoff: What puts you in a better position than the women of this district about what to do with their bodies?

Coffman: I'm pro-life, and I believe there ought to be exceptions.

Coffman: Jobs and economy. Says he has worked with Sen. Bennet on reforming laws to help companies that build satellites, or something.

Question for Romanoff is about why he worked with PACs as a State Rep.

Romanoff says he learned from his experience. Says Ken Gordon once asked him how anything will change if nobody moves to refuse PAC money.

Romanoff: We can't wait for certainty or predictability to act on something. "Voting 50 times against the Affordable Care Act and replacing it with nothing" is not a way to move forward. Romanoff is absolutely CRUSHING Coffman tonight.

6:48 pm
Question: What parts of Obamacare do you like?

Coffman talks about legislation he authored in 1994(!) when he was a state legislator. Says something about community health care clinics, and that we don't even know the impact of Obamacare. Very strange.

6:44 pm
Question: What is biggest falsehood your opponent is saying about you?

Romanoff: (jokingly) "How much time do I have?"

Romanoff says he is disappointed by 19 months of personal attacks from Coffman's campaign. Very strong answer.

Coffman's turn: Says it is just about being dishonest, just like a recent ad that Coffman doesn't elaborate upon. Romanoff asks, "Which one?"

Coffman talks for awhile and then attacks Romanoff — seriously — by mocking him for attending Harvard and Yale. Bad timing, Mike.

6:42 pm
Coffman seems unusually subdued tonight. Perhaps he's just trying not to appear combative, as he did in Debate #2 in Aurora when yelled at Romanoff on several occasions.

6:40 pm
Coffman says Romanoff opposed a rainy day fund — then Romanoff responds saying that isn't true. This debate is moving way too quickly from one topic to the next.

6:37 pm
Question about TABOR — is it still useful?

Coffman says he couldn't vote on Referendum C&D in 2005 because he was serving in Iraq. Coffman was also a candidate for Secretary of State when he returned to the U.S. — did he really not vote in 2005?

6:35 pm
Romanoff: It's one thing to claim to support NREL at a debate, but Coffman has voted to cut funding for NREL. "It's not what you say here, but what you do there [in Washington D.C.]"

6:34 pm
Are subsidies for clean energy companies a good idea for federal government? Romanoff jumps on Coffman's prior answers, saying it is clear that Coffman is going to do nothing to deal with Climate Change.

Do you think people are contributing to Climate Change?

Lots of murmuring in the crowd to Coffman's response. Coffman seems really unsure about how to deal with this question.

Do you think Climate Change can be fixed?

Romanoff: YES
Coffman: "Don't Know." Moderators press him, and he answers, "NO." Coffman is clearly uncomfortable.

6:26 pm
Coffman is asked why he doesn't support Comprehensive Immigration Reform (even though he called for such reform in a Denver Post editorial last summer). Coffman says that we shouldn't support people who broke the law intentionally, then talks about his legislation to help immigrants who want to join the military.

Romanoff says that reform is possible if Congress would do anything to act on legislation passed by the Senate.

6:24 pm
Question about birth control. Coffman says he supports access to birth control and recently received an award from an organization whose name he didn't mention.

Romanoff is hitting Coffman HARD on every question.

6:21 pm
Oooh. Tough question for Coffman about why he has changed his positions on issues such as immigration and Personhood.

Coffman says he opposes Personhood, then offers strange answer about how he "didn't run on immigration" in prior elections.

Good response from Romanoff, who says Coffman opposed adding Aurora to the CD-6 boundaries in re-districting. "I will be happy to relieve you of that responsibility."

6:18 pm
Next question: Would you support cuts to Buckley Air Force Base?

Romanoff says he thinks both he and Coffman would agree that Buckley needs to be protected.

Coffman says he supports the President in military base realignment. What's going on here? This is the 2nd time already that Coffman has said he supports President Obama.

6:15 pm
Next question on tax reforms.

Coffman talks about inversion, when companies re-incorporate overseas in order to avoid taxes. Says we need a "Territorial Tax System," and we need to reform taxes in general. Coffman started alright, then went off into technicality-ville.

Romanoff says we need to stop corporations from skirting their tax obligations.

6:12 pm
Romanoff is attacking Coffman early and often. Brings up that Coffman has called Social Security a "ponzi scheme."

Coffman responds by saying he sponsored legislation to reform food stamps and Social Security disability. "I do think that wealthier Seniors should pay more for their Medicare benefits." Bizarre and rambling response from Coffman.

6:10 pm
We're moving along faster than Don Suppes can delete his Twitter account. Next question is about the rising national debt.

Coffman: I break with my Party on the issue of defense spending. Nation building (like in Iraq) is a bad idea.

6:07 pm
Next question is on federal government responsibility to provide access to higher education.

Coffman says his father went to an HVAC training school, and says administration is biased against "trade schools." Okay, then.

6:06 pm
Coffman says he wrote the President "a bipartisan letter" about…something about Sunni Arabs and Iraq.

6:04 pm
Romanoff won the backstage coin toss, so Coffman goes first. Question #1 is about ISIS and President Obama's plan to deal with the threat.

It takes less than 1 minute for Coffman to mention that he is a former Marine. That might be a record.

Coffman and Romanoff give fairly similar answers to this first question.

6:00 pm
The candidates and moderators have arrived. You can watch the debate online at DenverPost.com. Moderators are Denver Post Political Editor Chuck Plunkett and CD-6 reporter Jon Murray.

5:43 pm
The crowd is filing in to the auditorium while we wait for the candidates and moderators to arrive.