UPDATE: Bonus round–check out this photo from 2010's "fact-finding tour" and tell us how many guns you see. 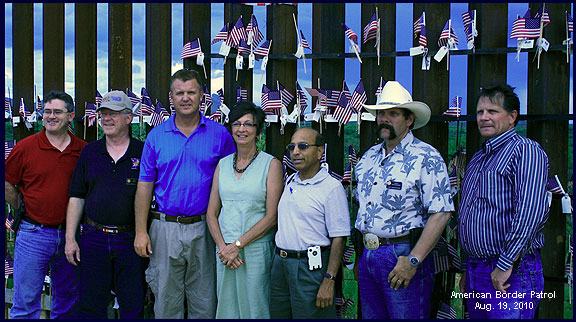 A press release this week from the arch-conservative Republican Study Committee of Colorado, a social club for the more right-leaning among Republican legislators in this state, announces they are taking another field trip to the Mexican border. In 2006 and 2010, both years like 2014 when immigration was in the headlines, a gaggle of Republican elected officials and candidates undertook similar border "fact-finding tours."

The Republican Study Committee of Colorado (RSCC) has planned a fact-finding trip to Texas to gain firsthand knowledge of the situation with respect to U.S. border security in southern Texas. In just a few weeks (October 5-7), Colorado legislators plan to meet with representatives from the Texas State Legislature, the Texas Department of Public Safety, the Texas Military Forces (Texas Army National Guard, Texas Air National Guard, Texas State Guard), and perhaps even some local citizen groups during a brief three-day visit.

"With all of the information and misinformation that we see on the topics of immigration and border security, and what they mean to Colorado citizens, we thought that the best approach would be to go gather some real-time information for ourselves," said RSCC Chairman and State Senator Kevin Lundberg, representing Colorado Senate District 15.

No taxpayer funds will be used for the trip.

Republican legislators have a history of traveling to the southern border, having made similar visits in 2006 and again in 2010. For legislators, there have been some things that have changed dramatically, and some that haven't changed much at all. The 2010 trip revealed a porous border, some unsettled locals, increasing criminal activity, and frustrated officials. Local ranchers, veterinarians, and others who used to work regularly with their neighbors on the border had seen a dramatic shift in the nature of activity over the years.

During their 2010 trip to Arizona, RSCC members were "briefed" on that state's new anti-immigrant law SB-1070 by its principal backer, then-Sen. Russell Pearce. Pearce enjoyed brief popularity for his role in passing SB-1070, but within a few years his political career had completely unraveled. Pearce was ousted from his seat in 2011 is Arizona's first-ever successful recall of a sitting legislator. Then just this week, Pearce resigned as vice chairman of Arizona Republican Party after saying this on a local radio show:

"You put me in charge of Medicaid, the first thing I'd do is get [female recipients] Norplant, birth-control implants, or tubal ligations,” Pearce said, according to the Phoenix New Times. “Then, we’ll test recipients for drugs and alcohol, and if you want to [reproduce] or use drugs or alcohol, then get a job."

We assume the RSCC will not be meeting with Mr. Pearce during their trip to the Texas border. With that said, RSCC members who took the trip to see Pearce in 2010 introduced numerous pieces of legislation the following year–both mimicking Arizona's SB-1070 anti-immigrant law, along with other ideas they had heard about on their "fact-finding tour." In the summer of 2012, the U.S. Supreme Court struck down most of SB-1070 as unconstitutional in the landmark case of Arizona vs. United States.

And of course, in the fall of 2012, Democrats retook the Colorado House from the GOP, crushing that party's single-seat, single-term majority in the one chamber they had managed to wrest control of in 2010–and helping lock down what has been the state of affairs in the General Assembly for going on a decade. Immigration wasn't the only factor in the GOP's significant legislative defeats in Colorado last election, but we can safely say that the Colorado GOP's image was not helped by the RSCC's antics in any way. Whatever disappointment Latino voters feel with Democrats for being unable to pass immigration reform, this is the stuff that reminds America's fastest growing bloc of voters who their enemies are in the starkest possible terms.

So, you know, take lots of pictures in Texas.