TUESDAY UPDATE: It now appears as though both of Suppes' Twitter accounts (@DonSuppes and @DonSuppes2014) have been deactivated. Perhaps the links below were just the tip of the ol' Twitter iceberg for Suppes.

UPDATE: Don Suppes appears to understand the problem with his social media posts, though it seems he is still trying to figure out how to deal with this problem. Earlier, we wrote that the Twitter accounts @DonSuppes2014 had been disabled, leaving only @DonSuppes as a Twitter account for the candidate. Well…now things have reversed, for some reason. The @DonSuppes account is inactive, but the @DonSuppes2014 accounts has been re-activated. In retrospect, perhaps Suppes should have just refrained from sharing stories about white supremacists and wild conspiracy theories altogether. 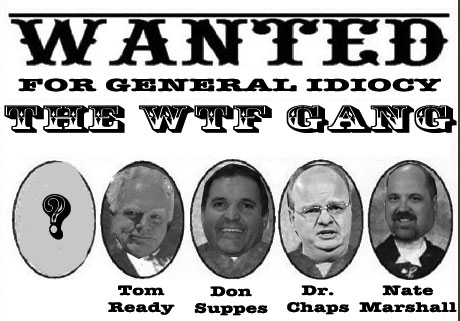 Republican Don Suppes is running against Democrat Kerry Donovan in SD-5, a huge, meandering Senate district in central Colorado that is one of the most hotly-contested races in 2014.

Suppes is apparently the Mayor of a Western Colorado town called Orchard City, and he likes to say that he is the "most conservative mayor in Colorado." We don't know if that statement contains any truth to it or not, but we won't try to refute it since we've only been aware of the existence of Orchard City for a few hours now. However, we can confidently say that Suppes is not one of the smartest mayors in Colorado, and you'll probably agree after reading this.

Suppes is the latest Republican candidate to join the group that we'll (not-so-affectionately) call "The WTF Gang" that includes Pueblo County Commissioner candidate Tom Ready; HD-15 Republican nominee Gordon "Dr. Chaps" Klingenschmitt; former HD-23 candidate Nate Marshall; and a host of other characters whose public statements are often met with a similar response from average Coloradans: "WTF are they talking about?"

Following on the heels of the recent idiocy perpetrated by Tom Ready comes a video (after the jump) in which it is revealed that Don Suppes has some, well, interesting, views on race and is really concerned about one of our favorite ridiculous conspiracy theories — the United Nations is coming to steal your guns treaty. 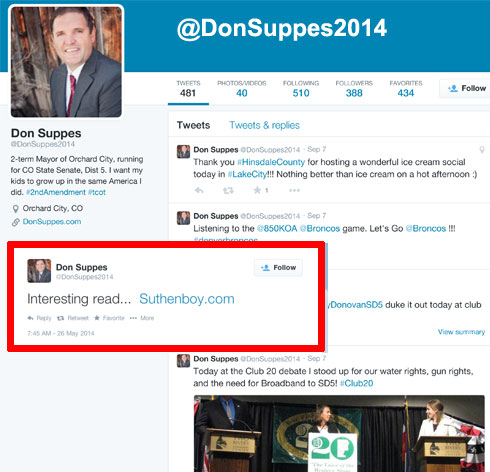 Suppes only recently deleted the Twitter account @DonSuppes2014, presumably to try to scrub the Internet tubes of some horrifying links that the Orchard City Mayor thought were worth considering.

Just last May, for example, Suppes Tweeted the comments, "Interesting read," in linking to Suthenboy.com, a white-supremacist website that predicts "The South Shall Rise."

You know what is really interesting about this, Don? That you would think nothing of sharing information about white supremacists as both a sitting mayor and a candidate for State Senate.

In conservative Tea Party parlance, which Ready and others have used before, "Interesting information" or "worth of discussion" has become the conversational equivalent of saying "No offense" before saying something mean and/or inappropriate to another person. Check out the video after the jump for more of Suppes' "ideas."