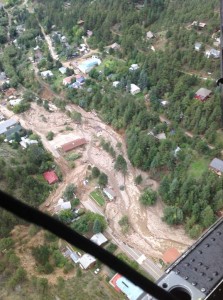 A press release from Sen. Mark Udall's campaign on their new TV spot hitting GOP challenger Cory Gardner over last year's shutdown of the federal government–which occurred just after major flooding along the Front Range of Colorado, requiring an emergency federal response. After several weeks of skirmishes on the issue, Udall takes the proverbial gloves off:

“Congressman Gardner would like us all to forget that he chose to shut down the government while thousands of Coloradans were struggling to put their lives back together after last year’s flood,” said Udall for Colorado spokesperson Kristin Lynch. “Gardner’s reckless shutdown delayed Colorado’s flood recovery and hurt our small businesses and local economies when they were at their most vulnerable. Congressman Gardner let us down when he decided to make a political point at the expense of Colorado flood victims.”

Despite Colorado’s clear need for disaster assistance from the federal government, Gardner voted along with Sen. Ted Cruz and the Tea Party to shut down the government just to prove a political point about the health care law. This delayed our flood recovery and forced Colorado to pick up the tab for National Guard personnel who were performing essential flood recovery work.

But Gardner’s reckless move hurt more than just flood victims. As the government shutdown continued for weeks and 40,000 Coloradans were furloughed, middle class families across the state felt the effect of Gardner’s shutdown on their pocketbooks. Shuttered national parks robbed small businesses of the tourism they depend on, veterans’ disability claims were delayed, and 2 million acres of public lands were closed to sportsmen from around the country during the busy fall season.

There are two parts to the story of the shutdown of the federal government in terms of consequences for Coloradans digging out from the massive floods that hit the Front Range just about exactly one year ago. First and most obvious is the delay in federal response to the flooding, which included delays in National Guard response from neighboring states. The second consequence was the effect the shutdown of Colorado's national parks and monuments had on local communities dependent on tourism. Estes Park, the gateway town to Rocky Mountain National Park, had already seen bookings cut by 50 percent after the floods, and the closure of the park drained millions more from the local economy.

Still another issue is the blowback against Colorado as a whole from East Coast politicians in both parties, including New Jersey Gov. Chris Christie, who branded Gardner a "hypocrite" for seeking disaster relief money for Colorado after voting against the second Hurricane Sandy relief bill. It was negotiations by Sen. Udall and Sen. Michael Bennet that were able in the end to mollify New Jersey's anger and secure the relief funds needed.

The harm done to Colorado by the post-flooding shutdown of the federal government is a matter of record. With that established, the question becomes, who was responsible for the shutdown? This is a point that Republicans refuse to concede a year later, even though the public overwhelmingly blamed the GOP in contemporary polling for forcing the shutdown in an effort to defund the Affordable Care Act. In the months since the shutdown, Republicans hoped to mitigate their culpability in that unpopular action by mercilessly attacking Obamacare–a strategy that is increasingly a failure as Obamacare continues to produce positive outcomes and the health insurance marketplace's startup problems fade from memory.

It's important to remember that until the polls started clearly showing that the GOP had lost the battle for public support, Gardner and the rest of the Colorado GOP delegation were solid backers of the confrontational strategy that ended in the shutdown. The AP's Nick Riccardi cut through the spin last month:

Gardner spokesman Alex Siciliano contended that congressman never supported the shutdown. However, Gardner, who is close to House Republican leadership, voted with other House Republicans to shoot down Democratic efforts to reopen government and for spending bills designed to be rejected by the U.S. Senate during the 16-day standoff. [Pols emphasis]

Gardner may not have been the most enthusiastic Republican as the shutdown loomed just before the beginning of October last year, perhaps sensing the danger–but the record is full of examples of Gardner defending the overall strategy. And as Riccardi notes, none of Gardner's supposed trepidation before the shutdown manifested in the form of votes.

With all of this in mind, it will be up to Colorado voters to decide whether the shutdown, and Gardner's role as a House Republican in causing it, are deciding factors in the 2014 U.S. Senate race. But what's not up for debate, as the polls demonstrate, is that the shutdown has gone down in history as a Republican gambit that failed. The old saying is that success has a thousand fathers, but failure is an orphan. Had the shutdown succeeded in forcing concessions from the President over Obamacare, Gardner would almost certainly be singing a different tune. But it didn't succeed. It was a disaster–in Colorado a disaster compounded on another.

And Gardner, whether he likes it or not, was on the wrong side.