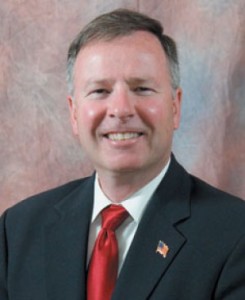 "The Congressman will not be providing Mr. Halter with a platform to spread his deceptive rhetoric and uncivil tone," campaign spokesman Jarred Rego wrote in an email to The Gazette. "People know where Congressman Lamborn stands on the issues. The only person in this race whose positions are unknown is Mr. Halter, who keeps masquerading as a moderate, all while disguising his liberal views."

Halter, a retired Air Force major general, said refusing to debate with him is part of a pattern Lamborn has shown since he was elected in 2006.

"There is huge frustration with his attendance record at meetings and his lack of accessibility," Halter said. "I get this more from Republicans than I do from Democrats. He has been a congressman for eight years, and they do not know him."

Every election season, opponents make what hay they can from the complexities, both temporal and political, of scheduling debates with one another. In the end, of course, they usually do debate at least once. But as you can see, Doug Lamborn doesn't need to hide behind scheduling excuses, he can just flatly tell the local paper that he's not going to debate his opponent because the guy is a big, bad, meanie liberal–and Doug Lamborn need not descend from his safe-seat ivory tower to even give Gen. Halter the time of day.

In a way, Lamborn's arrogant refusal to debate his Democratic opponent is a metaphor for his entire political career. The 5th Congressional District was Colorado's model safe Republican seat until the 2011 redistricting cycle made Rep. Cory Gardner's CD-4 an ultra-red bastion in its own right. Lamborn's principal competition for the seat has always been during Republican primaries, and Lamborn has faced heated primary challenges repeatedly since winning his seat in 2006. A reliable placeholder vote for the Republican majority and defense contractors, Lamborn has done almost nothing else to distinguish himself in office. His constituent services are by all accounts an afterthought compared to his predecessor Rep. Joel Hefley. And when Lamborn does make headlines, it's usually for something ridiculous he says like his Obama "tar baby" gaffe.

Given the right combination of circumstances, we can envision a Marilyn Musgrave-style pickoff of Lamborn, based solely on Lamborn's ineptitude, in any given election. His replacement might not last in office longer than Musgrave's successor did, but in terms of personal skill as a candidate and politician, Lamborn is a joke–propped up artificially by his safe Republican seat.

In a perfect world, incompetence should always be a vulnerability.