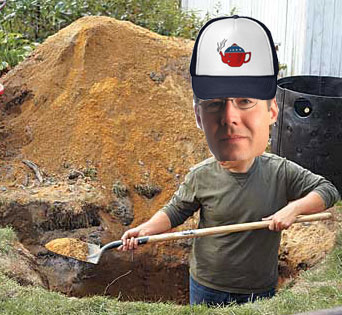 Chuck Plunkett, the Political Editor at the Denver Post, responded rather quickly — and officially — after a video circulated this morning of Plunkett speaking admiringly to a conservative group ("The Liberty Movement," which is closely connected with Colorado's own super-conservative Independence Institute) about how biased he is toward their ideals. We thought about just updating our earlier post with a link to Plunkett's blog post on "The Spot," but after re-reading his "response," we decided there's too much to discuss with just a brief update.

Say what you will about Chuck Plunkett, but you've got to give him this: The man can dig some impressive holes. Few people can dig themselves deeper or faster, and his latest aggressively passive-aggressive blog post is a sight to behold. Let's examine a few of the more interesting paragraphs from his 723-word diatribe, "On My Liberty Movement Advice":

A top political and policy adviser to Colorado Gov. John Hickenlooper, the chairman of the state’s Democratic Party and others on Sunday dashed off some posts on Twitter linking to an old video clip to question whether The Denver Post’s politics coverage is biased.

It’s a serious question for The Post’s politics editor, and I take it seriously. Given that the posters are such big deals in the political firmament, I thought I should try to answer them. But not in 140 characters.

This is quite the lede. Plunkett starts pointing fingers in the first sentence while trying to both downplay the reach of the video and drag the entire newsroom into a problem that is his alone. According to Plunkett, this was only happening on Twitter (untrue, but, whatever), which meant it wasn't that big of a deal. So why respond within hours of the video's appearance? Because this is serious and he takes things seriously.

The single most telling phrase of the entire post is also in the first sentence, in which Plunkett says that these mean Tweets were calling into question "whether The Denver Post's politics coverage is biased." We doubt that anyone following the discussion under the #copolitics or #copols hashtags on Twitter today — or reading Colorado Pols — would be confused about the concern being voiced. This video, and this story, is all about the appearance of bias on the part of Chuck Plunkett individually. Such criticism could certainly imply a problem at The Post in general, but that would be a gross exaggeration of the criticism today. As we wrote earlier, the video makes it clear that Plunkett "carries a strong bias toward conservatives and Tea Party ideals."

…I hope Denver Post readers who worry that our politics coverage might be biased given Salazar and Palacio’s statements on Twitter will watch the clip – and watch it in its entirety. I believe that an objective viewer of the clip will find it understandable that I stand behind my remarks and do not regret them…

Here we find Plunkett trying to deflect a pass that was never thrown when he says that he stands behind his remarks and does not regret them. Great.

Here's the thing, Chuck: You're not a politician. You're not running for office. Nobody's asking whether or not you truly believe what you said. Everyone does believe you — that's the problem.

…I then went on to say that if the Liberty Movement wanted to have impact and provide that leadership, as it said it wanted to do, it needed to provide the intellectual groundwork for arguments that those of us in the middle who decide elections understand. Yes, like me, an unaffiliated voter who votes both sides of the ticket based on the candidates…

Yes, you read that correctly. Just a few sentences after talking about how he stands by his statements — all of which are very much in line with a far right conservative ideals — Plunkett decides to play the "I'm an unaffiliated voter" card. This is completely meaningless, of course; choosing not to officially affiliate with a political party says nothing at all about your political leanings. The overwhelming majority of reporters and editors at The Denver Post are probably registered as "unaffiliated" voters, because that's what a journalist is supposed to be doing. Plunkett wants you to pat him on the back for stopping at stop signs.

Most of the rest of Plunkett's "response" is dedicated to re-hashing a bunch of other points he made in his speech. Again, these are answers to questions that nobody is asking. When Peyton Manning speaks to the media after a Denver Broncos game, the Q&A doesn't begin with a rundown of what happened in the second quarter. We'll skip past all of this because, as Plunkett says, you can watch the video yourself.

On to the end:

I often say that it is too bad that in these hyper-connected days, with so much information and communications technology at our fingertips, that political discourse is conducted on semi-contextual got-ya moments. A lot of money is being spent and wasted to further the kinds of hired guns who make this present state of our discourse so much like a middle-school bus ride.

But a lot of us got off that bus a long time ago and never want to go back. So I hope this helps.

Sorry it took so much more than 140 characters.

Sorry, were there actually 140 characters anywhere in Plunkett's "response" that address the only question anyone cares about? Plunkett's 8-minute speech to the "Liberty Movement" is noteworthy because he goes out of his way to admit that he has a heavy conservative bias that he doesn't even try to hide at the Post. The rest of his ideas and comments from the video provide no additional context and do nothing to deal with the GIANT F***ING ELEPHANT IN THE ROOM.

Don't forget — Chuck Plunkett has a history of making questionable editorial decisions that appear, at the very least, to be overly helpful to Republican candidates and ideals. That history of work, coupled with his own words to the "Liberty Movement," are what fuels concern that Plunkett consciously allows his conservative bias to shape the political coverage at The Denver Post. Like most of the holes that Plunkett ends up digging, this controversy is entirely of his own making.

Plunkett created this problem himself. He inflated the problem himself (seriously, why would you "respond" to the circulation of the video if you aren't nervous about it?) And he's not going to get out of this mess by digging deeper or trying to pull the rest of the newspaper staff into the hole with him.