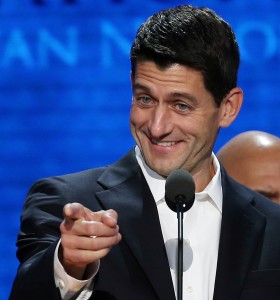 ​Roll Call's Humberto Sanchez reports–none other than 2012 vice presidential nominee and conservative icon Rep. Paul Ryan was in town yesterday, for a book signing at the Barnes & Noble bookstore in Thornton! We hadn't heard anything about this up to now, but Rep. Ryan has been on a relatively low-key book tour throughout the August recess.

Ryan was confronted by Greisa Martinez, a national organizer with United We Dream. Martinez and three companions bought books and waited in line for Ryan. But once Martinez reached the front of the line, she asked Ryan questions about the lack of congressional action on immigration.

“I do not understand why you want to deport me and my mother? Why didn’t your party pass immigration reform when you had the opportunity,” she loudly questioned, mentioning the deferred action for childhood arrivals program. “Rep. Ryan, My name is Greisa Martinez I am DACA-mented and I am hear to stay!” One of her cohorts unfurled a banner and the store manager asked her to leave.

Ryan told her he wasn’t taking questions, and initially kept interacting with other book buyers, but ultimately ducked into a back room until police came and escorted Martinez out of the store…

Being a well-known leader in the Republican-controlled U.S. House, which if you haven't heard enjoys popularity ratings somewhere in the vicinity of traffic jams and root canals, we suppose it's not a surprise that Ryan wasn't in Colorado yesterday to campaign with fellow Republican Congressmen Cory Gardner or Mike Coffman. Gardner and Coffman are both locked in tight swing races, running as hard as they can to the middle–ground that Paul Ryan, safe to say, doesn't occupy.

Ryan told CQ Roll Call he sees similar outbursts in states with major political contests, such Florida and here in Colorado. The Senate race between Republican Rep. Cory Gardner and Democratic Sen. Mark Udall could decide control of the chamber, and is rated Tilts Democratic by The Rothenberg Political Report/Roll Call.

There a pretty good argument to be made here, folks: if Paul Ryan wants to help his party to victory this November, he should consider sticking to states like Texas and Oklahoma.