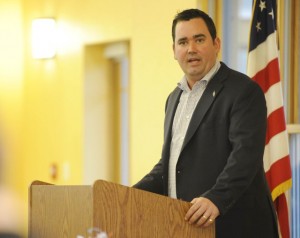 It is only Wednesday, but it has not been a good week for State Treasurer Walker Stapleton. And it is only going to get worse from here.

Yesterday, the Colorado Supreme Court dealt Stapleton a blow by refusing to hear his legal attempt aimed at opening up the books of PERA, the Public Employees Retirement Association. As the very-thorough blog Pensions 360 explains:

Back in 2011, Stapleton filed a lawsuit seeking the release of retirement benefit data for Colorado’s highest-earning pensioners. But the state’s pension fund, the Public Employees Retirement Association (PERA), said the information was confidential and refused to release it.

Since then, two lower courts have sided with the pension system on the issue. Stapleton appealed the rulings all the way to the state Supreme Court—but the Court announced today that they wouldn’t be hearing his case.

Stapleton has been trying to gain access to information about the top 20 percent of PERA's beneficiaries and their annual retirement benefit. Stapleton's lawsuit, ostensibly to "learn" more information that could give him insight into what he calls "financial DNA" about PERA investments, has been widely dimissed as a political ploy. The PERA board refused Stapleton's request for the data back in 2011, citing privacy concerns and noting that accessing the data was not a function of his role as a trustee of the retirement account.

2013: There were 7 PERA meetings. Stapleton attended 2, but left both early.

*NOTE: From the September 20, 2013 PERA Board Meeting Minutes: “Mr. Stapleton requested the removal of his absence from the June 25, 2013 Board meeting minutes, as his designee Brett Johnson was present.”

2014 (through June): There have been 5 PERA Board meetings. Minutes are not available for the June 24 meeting. Of the other 4 meetings, he has fully attended 1 and left early at another 2 meetings.

Stapleton's dismal attendance record at PERA Board meetings makes it difficult for him to argue that his lawsuit — or anything else related to PERA — has been done with the best intentions of Colorado retirees in mind. Stapleton hasn't proven to be particularly savvy when it comes to investment decisions around PERA (or investment advice in general), and his lax attendance at Board meetings further calls into question his capability and interest in managing the state's money.

But perhaps more importantly for Stapleton, this information is a serious mark on his resume as he looks to be re-elected in 2014 and hints at a possible run for Governor in 2018. You might recall that Stapleton was widely criticized for moonlighting on the job; Stapleton has continued to work for the real estate firm SonomaWest Holdings while he has served as State Treasurer, and his poor attendance record at PERA Board meetings again brings up the question of just how committed he is to the job in which in was elected to serve.

If Stapleton can't find time to attend meetings directly related to his elected position…what is he doing instead? And why are taxpayers footing the bill?