Gardner Gets Hammered for Hiding Details on Insurance 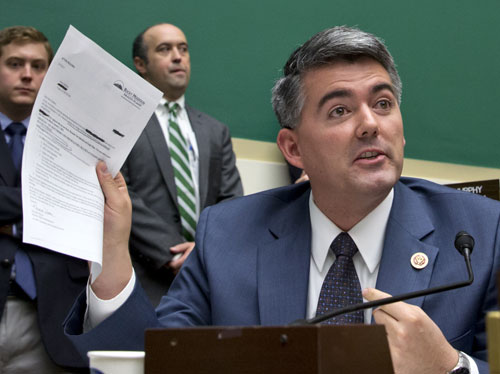 Republican Congressman Cory Gardner has been peddling a story about his family's insurance coverage and the horrors caused by Obamacare for some time now — but the opaque nature of his argument is coming under increasing scrutiny from the media.

In Gardner's latest television ad, the GOP Senate candidate again tells the tale of his family's insurance plan being cancelled as part of the Affordable Care Act. But in a new "Truth Test" from 9News reporter Brandon Rittiman, Gardner's campaign fails miserably when pressed for details:

Gardner released his cancellation letter, from Rocky Mountain Health Plans, but took out all the details about his old plan.

The Gardner campaign denied repeated requests for details about the coverage that Gardner and his family had under the plan that was canceled, saying only that it came with a premium of $651.75. [Pols emphasis]

The campaign declined to provide evidence of the previous price or any details about the level of coverage and deductibles under the prior plan.

The cheapest new alternative listed in the cancellation notice was a "bronze" plan listed at a premium of $1246.90.

Even if Gardner's old cheaper plan was meager in its coverage, Gardner would have a legitimate policy argument to make by saying he shouldn't be required to buy a better plan than he had before.

However, if he's going to use his personal healthcare story as part of the political debate, it would be better to have the full context.

Rittiman isn't the first to scratch his head at Gardner's insurance claims, but what is interesting to note in this "Truth Test" is the increasingly aggressive line of questioning leveled at Gardner's campaign — and the consistent refusal to provide requested information. Gardner has repeatedly claimed that hundreds of thousands of Coloradans saw their health care plans cancelled because of Obamacare — a talking point that has long ago been proved false — but reporters are increasingly turning their attention to the rest of the story.

You can read between the lines here as Rittiman concludes his "Truth Test":

Like ads before it, this one references real issues with Obamacare.

But when you get the full story, it doesn't sound as bad as the Gardner campaign would like it to.

As for the congressman's personal story, you should take it with a grain of salt because we don't have all the details. [Pols emphasis]

Remember, folks, that the letter Gardner consistently discusses is actually addressed to his wife — and we only know that because Fox 31 reporter Eli Stokols kept asking him until he revealed the contents. From a Fox 31 story last fall:

Since then, FOX31 Denver has asked Gardner to provide a copy of the letter or to provide additional details about the policies.

After our story aired on Good Day Colorado Friday morning, Gardner released a copy of the letter with some information redacted, that he says his family received.

The bottom line here is really quite simple: If Gardner's personal health care sob story is free of holes, as he claims, then why not just turn over the proof to a reporter and end this line of questioning once and for all?

The truth is rarely this complicated.