UPDATE 8/16: Governor Nixon called for martial law, a midnight – 5 am curfew.  This was in response to increased looting and unrest. The Ferguson PD is still stalling on providing Officer Darren Wilson's photo or the shooting incident report. Citizens are frustrated. Media is confined by law to a "free speech zone". Some journos are still defying the restriction, using smartphones instead of professional cameras.  At midnight after curfew, about 75 protesters are still defying curfew and a heavy rain. New Black Panthers helped to clear the streets before curfew. At least police are keeping Captain Johnson's promise – no tear gas, no over-militarized response.

UPDATE 8/15: Captain Ron Johnson of the MO Highway Patrol did a great job in resetting the tone and relieving the fears of the community. He demilitarized the operation, and people were able to continue to peacefully protest.  Today, the Ferguson PD released the name of the shooter: Officer Darren Wilson. At the same time, instead of the actual shooting incident report, the PD released a store surveillance video which purports to show the victim, Mike Brown, robbing the store. Community reacted to this as an attempt to smear the victim without a trial. "I am Mike Brown" tribute song by rapper Gage is going viral.

UPDATE: Governor Nixon confirms that he will take peacekeeping duties out of the hands of the St. Louis County police force. Peace will be kept by the Missouri State Highway Patrol. Federal Department of Justice will investigate the shooting. 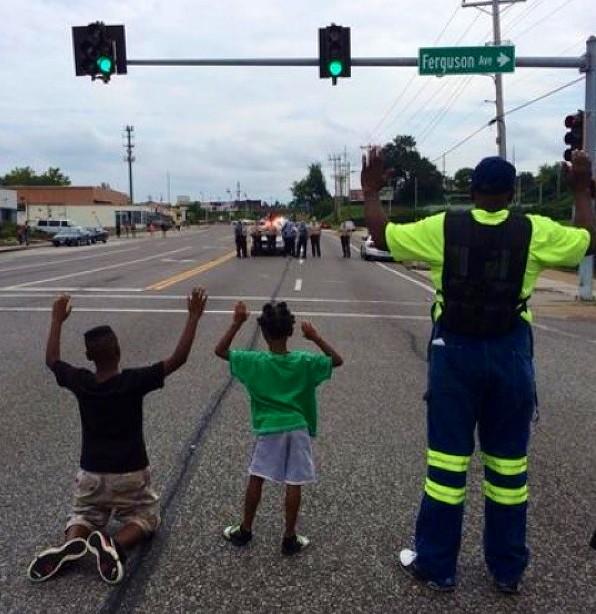 It looked like a scene that should be shown in old black and white photos from the history books about the Civil Rights movement – lines of African-American citizens, crying, "Hands Up! Don't Shoot!" (the above photo is from the Twitter feed of  Markia Holt. https://twitter.com/MarkiaHolt )

Facing them, grim lines of camo-clad and armored white police, throwing tear gas and shooting rubber bullets from tanks and armored vehicles.  Nobody talking. Nobody negotiating. Chanting: "What do we want? Justice!" Everyone else, grim, silent, running, hiding, ducking behind shrubbery. One man on a bullhorn appears to me to be a provocateur, cursing at the police. (about 5:40 into the KARG video)

Photo, below, of police forces confronting protesters. From the twitter feed of Ryan J Reilly, a Huffington Post reporter who was arrested yesterday: He tweeted: "Overkill in #Ferguson. Officer won't answer my question about why this is needed. " Ferguson police chief Tom Jackson said in an ABC interview that his officers were responding to violence and threats from protesters. 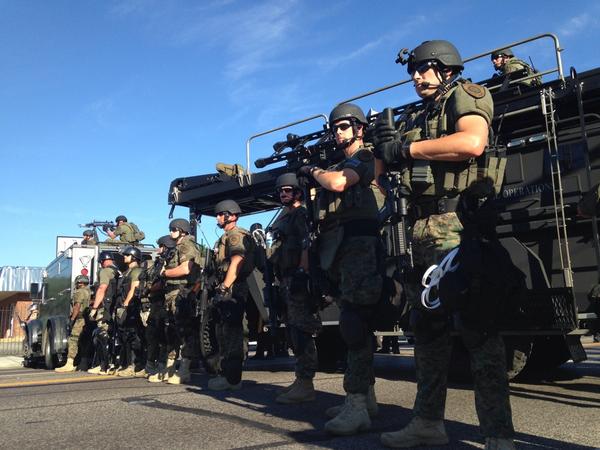 The scenes from Ferguson, Missouri, last night were brutal. Clouds of tear gas billowing over the streets. Reporters on live feed choking and unable to talk, continuing to cover and live-tweet the story. Brave journalists who refused police orders to "shut down your cameras", were tweeting from McDonald's restaurants  that police were rounding protesters up and forcing them into vans, while the protesters screamed and yelled for medical help. Then the journalists started getting arrested.

Flash-bang and stun grenades were thrown at unarmed protesters. You can see this about 11 minutes into the video. Almost all the police are white – what you can see of them behind the camo and the flak vests, helmets, shields.- and almost all of the protesters are black. The population of  Ferguson, a working-class  suburb of St. Louis, is 67% African-American, and complaints of police brutality and discrimination are common.  The Ferguson County Police Chief, Jon Belmar, is choosing to escalate, or doesn't know how to de-escalate, the situation. Meanwhile, according to Belmar, Anonymous hackers are threatening to shut down the police internet. Schools are closed until Monday. People from Gaza are tweeting the residents of Ferguson about how to deal with being tear gassed.

How did it come to this?  Like the Trayvon Martin shooting, like way too many others, it started with the shooting of a young, unarmed black man.  He was shot by a policeman, and died on the street, where his body lay for hours. The police department closed ranks around its brother, denying the name of the shooter to media and to citizens. The ACLU has filed suit to get it. For five days now, peaceful protests of citizens demanding justice have been met with inaction and stonewalling from the Ferguson police department.

On August 9, a young black man, Mike Brown, was walking down the middle of a quiet street, on his way to visit his grandmother, accompanied by his friend. A police car, driven by a cop who has yet to be identified, ordered the young men to move to the sidewalk. They were reluctant to comply, as they were almost at their destination. The cop didn't wait for them to comply. He drove up next to them and tried to open his door. When the door was blocked by one of the young men, the cop reached out, grabbed the kid by the throat, and almost immediately shot him. The child ran, making it 30 feet before he collapsed, face down, hands up, shot again six more times.

This is the police version:

The police gave the young men a lawful order to get out of the street, and they disobeyed. The larger of the two young men assaulted the officer, and tried to take his gun. So the cop shot him. An investigation is proceeding. Citizen witnesses, including the victim's friend, who escaped, have NOT been interviewed by the police to date.

A police chief commentator on Rachel Maddow's show said that "Everyone needs to ratchet it back down." He  said that this could probably have been avoided if the police had just given information, like the name of the police officer who shot Mike Brown, and followed procedure. Instead, decisions to stonewall have escalated into the situation you see now.

For five days, peaceful crowds have rallied and marched during the day, calling for justice. The young man's parents have called for calm and nonviolence.  There has been some looting and crime at night, from isolated individuals, but it was not widespread. The police response to this was way overblown. At least 70, per Huffpost  reporting, have come in to Ferguson, equipped with tanks, armored vehicles with gun turrets, body armor.. Police have pointed rifles directly into the crowds. Tear gas and rubber bullets appear to be how police are communicating and negotiating. Ferguson's police chief, Mr.  Tom Jackson, speaking on the Fox News Network. blamed "outside agitators" for the unrest. He has not called for a curfew.

I think the President needs to send in the National Guard to keep the peace. Otherwise, we'll see more discriminatory violence from poorly-trained police and militias who will flock to the scene.

Unfortunately,1/4  (27 out of 115) of the Missouri Sheriffs are Constitutional Sheriffs, sworn to resist Federal orders that they think are unconstitutional.  This includes Sheriff Oberkorm, President of the Missouri Sheriffs Association.  So that could be another ugly confrontation – between local and Federal authorities here. Interestingly, the Patriot groups, such as the Oathkeepers, who normally have been very vocal about police militarization and the coming confrontations to "take back America", have been silent on what is happening in Ferguson to citizens of color.

Instead of black and white, it is a scene in night vision green and black. And yes, to our shame, it is America.

The best, most up-to-date reporting has been coming from social media and citizen journalists. Right wing commentators may decry liberal bias, but they have been, and continue to be, eerily silent on real-world government oppression of civilians in Ferguson.

UPDATE 9/15/14: We are now three weeks into the Grand Jury investigation of the Michael Brown shooting. It is completely closed to the public. Per Dana Milbank's reporting in the Washington Post, Prosecutor McCulloch, as predicted, is looking not to charge Officer Wilson at all, and hoping to blame the lack of consequences  on the Grand Jury itself. McCullough has dumped the huge pile of conflicting evidence, including multiple new eyewitness reports onto the jury with no recommendations for charges of Officer Wilson.

New protests, more distrust between the police and the Ferguson community is being set up even as you read this. Poor choice, Prosecutor McCulloch.